As we reported, Tucson Unified School District has at least one sitting Board member who owes Planned Parenthood big time for her successful elections. 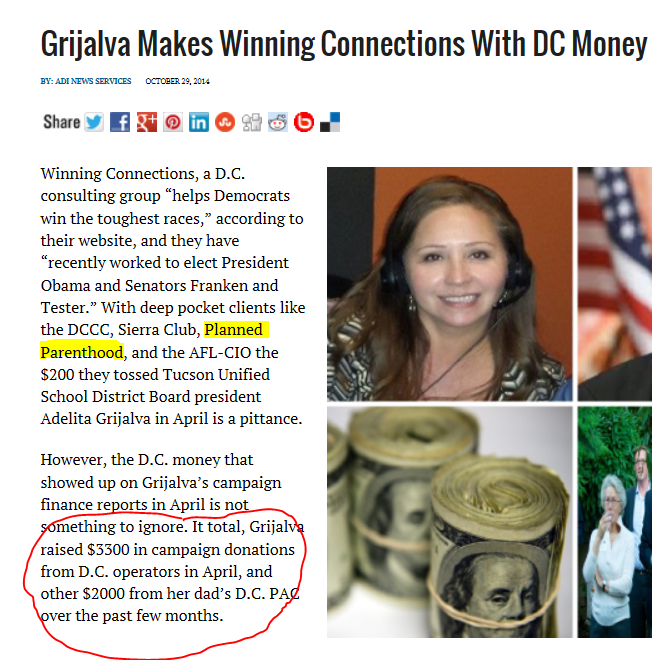 Why do we care about Ms. Grijalva’s dad?  Take a look at his voting record on abortion.  Note the 100% rating by NARAL, one of the nation’s leading advocates for abortion.  This appears to be a family affair.

This spring, TUSD has been discussing making a policy change to their sex ed instruction, which would then lead to developing a new, updated curriculum.  After all, it is 2016, what about sex has changed in 10 years?

The date is set, the governing board will meet on June 14, 2016.  One of the board members, Mr. Mark Stegeman, does not see a problem at this point with the direction the board is going as seen in his response to a parent who urged him to vote against any Planned Parenthood curriculum:

Maybe he’s correct, but there is reason to be concerned.  If you listen to the audio from TUSD’s April 19, 2016 board meeting, you’ll hear some critical information at the one hour mark.  Board members admit the proposed policy revision includes language developed by Planned Parenthood.

About two minutes later, Superintendent H.T. Sanchez plays an obnoxious video that uses youth to demand comprehensive sex ed.  This is not a surprise because Planned Parenthood has been forging relationships with teenagers in a variety of ways.  In the four-minute video, the young female narrator bashes abstinence-only sex ed and refers to “European Progressive Sex Ed”.  She explains Europeans focus on positive sex, not the dangers.  Remember this score card that Planned Parenthood circulated to school districts in Arizona, around the time Tempe Union was voting on FLASH? 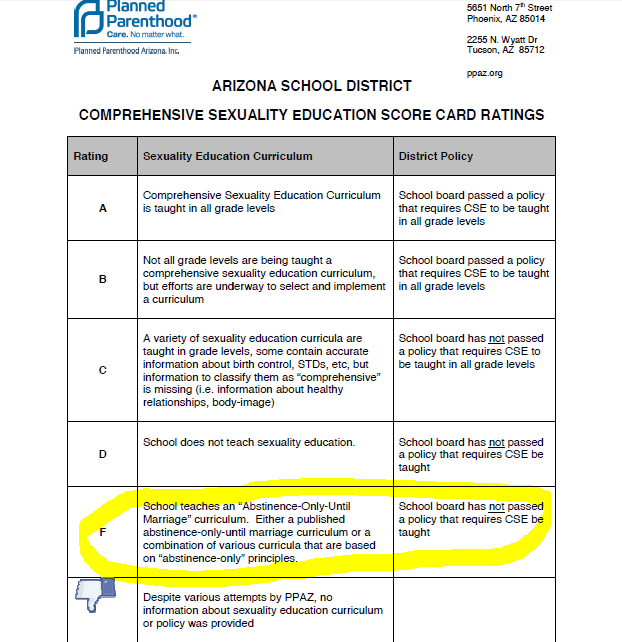 The fact that the young girl in the TUSD video does not approve of abstinence only curriculum is no coincidence with the failing grade PP gives those programs, right?

Why doesn’t Superintendent Sanchez play a video of students bashing drinking laws and instead focus on how much fun it is to drink underage?  If sex is okay for unmarried teenagers, they might as well enjoy it with a beer or two.

Later in the presentation, Superintendent Sanchez explains the district will have avenues to explore to develop the curriculum.  He didn’t say whether the avenues are paved with Pink, but it’s looking like a strong possibility.  Why else would Planned Parenthood of Arizona retweet this:

**UPDATE June 8, 2016: Tucson families and taxpayers, your work is cut out for you.  Please click on the above link in the tweet to voice your opinion on-line.  Also plan to attend the next TUSD Board meeting, which is now scheduled for 5:30PM, 6-14-16 and politely let the board know Planned Parenthood is not welcome.  There are comment cards available when you arrive at the meeting.  You will need to fill one out to get in the queue to speak.

We know from the goings-on in Olympia, Washington, once Planned Parenthood gets a foot in the door, they completely take over the schools.  Let’s stop them at the front door.