There was a time when students attended Civics classes in the United States and learned about the three branches of government, Executive, Legislative, and Judicial.  These branches are supposed to be equal, although there is discussion about whether that occurs in practice.  Regardless, the responsibilities of the Judicial Branch are very specific according to the Constitution.

The National Constitution Center published Article III of the Constitution, the section which describes the Federal Judiciary, which includes the Supreme Court.  Here is a screenshot of the Courts’ responsibilities:

Notice the Federal Courts are to reference the United States Constitution, laws of the land, and treaties.  The Founders did not allude to Republican or Democrat, liberal or conservative, who clerked for whom, women’s rights, healthcare, who went to which law school, the religion of the appointed judges, etc.  As of this writing, we are less than 48 hours away from a scheduled announcement about who President Trump will nominate to replace retiring Justice Anthony Kennedy.  What is the main issue we are hearing about 24/7 on the news?  Roe vs Wade.

Why is it all of our political dialogue consistently turns to abortion rights?  Even Fox News hosts regularly refer to the potential candidates as more or less conservative than the others and how that will affect the status of Roe vs. Wade.  Please someone, take a stab at asking which of the potential nominees will best review the CONSTITUTIONALITY of cases brought before the court.

What will be telling is if the President nominates that darn Catholic Judge Amy Coney Barrett.  How dare she is even considered because not only is she Catholic, she’s a practicing Catholic with a house full of children!  After reviewing Article III of the Constitution, we can’t find anything about religion or number of children which would disqualify Judge Barrett for the Supreme Court.  If she is the nominee, watch how quickly the loud, nasty pro-abortion advocates forget Barrett’s job will be to determine the constitutionality of laws, despite where she spends her Sunday mornings.

Supreme Court nominees are not the only members of government who now have to answer to Planned Parenthood and their advocates in order to get their jobs.  In Arizona Legislative District 18, Senator Sean Bowie has plenty to say to Planned Parenthood but little or nothing to say to his own constituents.  Recently Bowie was asked how he felt about a controversial ballot measure which is is to be voted on in November. 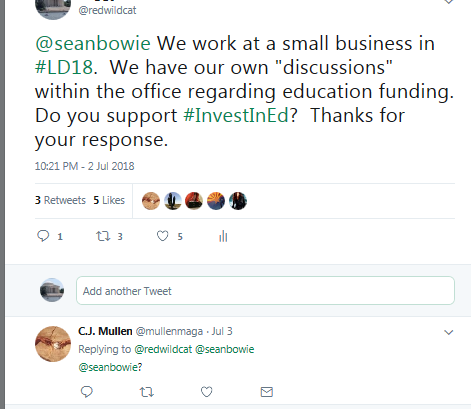 The tweet was posted on July 2, 2018.  Several others retweeted yet as of this writing Bowie has not responded, although he has been on Twitter this week to promote himself.  However, he has had plenty to say to Planned Parenthood; he even gave Planned Parenthood of Arizona a lengthy interview.

Think about where we are as a culture when everything political circles back to Planned Parenthood and abortion.  Why does this organization yield more power than the Constitution?  Why are liberal candidates happy to partner with them when some won’t even respond to their own constituents who pay their salary?

The fact that Abortion, Inc. Planned Parenthood is the bar we have now set,  it is no surprise how deep our society has sunk.