Recently a reader contacted the Maricopa County (Greater Phoenix Area) Supervisors regarding the article we wrote about county tax money going to Comprehensive Sex Ed.  None of the five supervisors responded, instead they dumped it on Dr. Robert England, Maricopa County Director of Public Health.  While Dr. England may or may not support Comprehensive Sex Ed, as of this writing the supervisors elected by the citizens have not taken ownership of their financial decisions.

In Dr. England’s response he affirms, but also tries to distance himself from the Comprehensive Sex Ed agenda.  Let’s breakdown his response.

First Dr. England explains how and why Maricopa County chooses outside providers to teach sex ed.

Touchstone, who is that?  It appears it is a collection of behavioral health programs in Maricopa County.  In fact, the website describes its pregnancy prevention programs, especially in Maryvale.  Maryvale is a minority community on the west side of Phoenix.  As usual, the government targets those of color with strong family values.  Even better, Siecus, the federal government’s pro sex ed/abortion curriculum standards refers to Touchstone on its website. 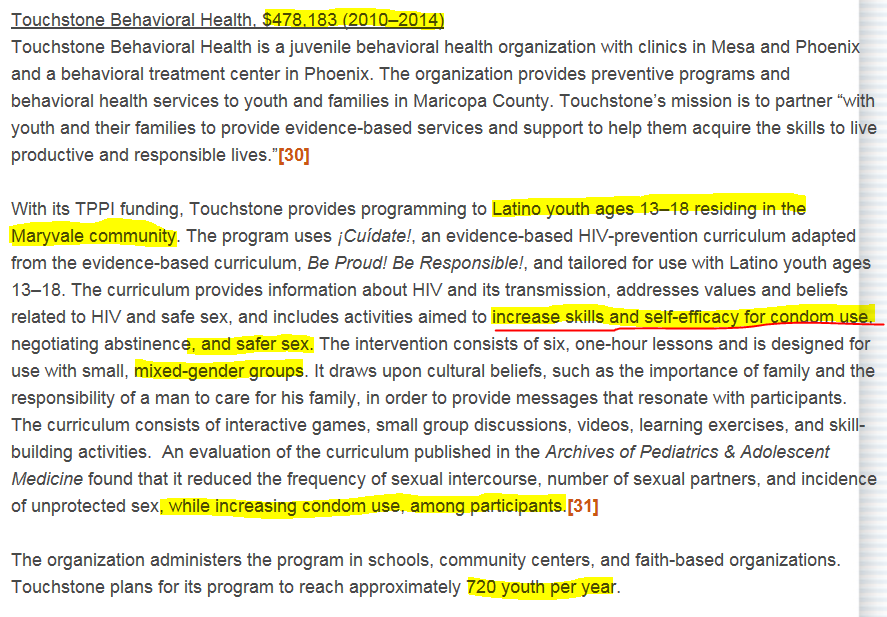 There is a reason Touchstone is pushing condom use, which in turn increases promiscuous behavior, STDs, and pregnancy.  According to Dr. England, Maricopa County’s partner is using the “Draw the Line/Respect the Line Curriculum.”

The other curriculum mentioned in Dr. England’s response, “Making Proud Choices”, is also developed by Planned Parenthood and funded in schools by Obamacare.  It is so graphic some parents have gotten the program halted in their districts.  In Hawaii, State Representative Bob McDermott was quite surprised at the content of Making Proud Choices, when he finally got to see it “under supervision.”

Since Making Proud Choices normalizes homosexual behavior, does is fit in the boundaries of Arizona law which does not allow teaching homosexual relationships as normal?

Our reader asked Dr. England why the LGBTQ community was targeted in the grant money.  Here is his response:

Dr. England makes no sense.  If LGBTQ youth have a tendency towards risky behavior, why promote “safe” sex and condom use which increases risky behavior, and thus STDs?  Why not abstinence only for these kids, also?

Then there is his Planned Parenthood response:

Planned Parenthood may not be getting any money directly from Maricopa County’s grant, but they are sure getting business from the programs the providers use and on the other side when the girls become pregnant, get an STD, and want an abortion.  Dr. England admits he doesn’t know whether Planned Parenthood is behind the healthy choices programs offered (what a sales job using the words “healthy choices”).  Didn’t he check?  Did he ask any questions?  The Supervisors depend on his medical knowledge, but apparently he didn’t follow up.

Taxpayers in Maricopa County, if any of this concerns you, please contact your Supervisors.  We do know that at a Maricopa County GOP meeting this month the Republican County Supervisors were given a round of applause for their great work.  If you don’t think their work is so great, hold your applause and shoot them an email.