The only way most radical agendas are advanced in politics and government is by changing the name and description of that agenda.  This is how “Women’s Healthcare” became abortion until the day  of birth (Hillary Clinton in the third presidential debate on 10-19-16).  Also, somehow a successful law student was able to get away with accusing Republicans of banning all birth control (show Sandra Fluke a Walgreens near her home) and this also became “Women’s Healthcare”.  Recently, we’ve been nudged into believing the “Diversity and Inclusion” agenda is a benefit to all.  If we oppose this, we hate gays, cling to our Bibles, and oppose all funding for schools because we hate kids.

Tempe Union High School District (TUHSD)  in Arizona is subtly expanding its Diversity and Inclusion agenda, which really means LGBTQ and everything in between, and all taxpayers and students better play along or they will also be lumped into the “You must hate gays and kids” column.  This post picks on TUHSD, but truly this scenario is occurring across the country and this information is meant as a heads-up.  Dr. Kenneth Baca, TUHSD’s superintendent, even mentions another district has contacted him about this program.  Dr. Baca is behind the program, just as he was behind Planned Parenthood’s curriculum in 2014.  Even though Dr. Baca works for the taxpayers, he gets what HE wants.  Right now he wants to defy Arizona law (again) and the Board members will go along to get along instead of research the issue.

Fast forward to about the 20 minute mark of the Tempe Union Governing Board’s audio of the regular 10-19-16 meeting.  The district has set up a way that any student will be eligible for any athletics and extra-curricular activity–no discrimination is allowed.  What happens when a student who is born a boy decides he is a girl, dresses as a girl, and wants to compete on the girls tennis team?  He will be allowed because TUHSD has already consulted its legal counsel and executive team according to Dr. Baca.  Which locker room will this boy use?  How will the girls on the tennis team feel?  If they complain, they will be labeled as homophobic or hateful?  What about the girl on the opposing team who will have to play this young man in singles?  Can she complain?  If so, will the students and their families be sued by groups like GLSEN or the ACLU?

Board members DeeAnne McClenahan, Brandon Schmoll, and Moses Sanchez stumbled over the need for this additional layer of mandatory expectations when the district already complies with laws regarding non-discrimination (not to mention the Constitution which protects all citizens).  All three were correct, there is no need for additional verbiage or personnel to administer these rules.  What Dr. Baca didn’t tell them is he is setting the table for the LGBTQ agenda.  Whether or not these three board members suspected as much we don’t know; even the public may have concluded they were close-minded if they pursued the matter further.

It’s important to know how the extreme LGBTQ wing is using the words Diversity and Inclusion so they can indoctrinate your kids using your tax dollars in your school buildings.  There is always money involved; if money wasn’t flowing from the government this charade would be ignored and the schools may have time to actually focus on teaching.

GLSEN, a “non-profit” which promotes the LGBT agenda in schools, links educator resources to their website.  Many of the words they use are in Dr. Baca’s presentation to the Governing Board, words like respect, diversity, and inclusive.  Who is permitting GLSEN near our kids?

Whether  TUHSD and other districts lose sleep at night over Diversity and Inclusion isn’t likely.  What has happened though is the words have become the norm in our society while the meanings have been changed.  And the federal government has a lot to do with it, pressuring federal agencies in a top-down mode to abide by their mandates or funds will be affected.  Here is a link from a South Carolina program to prevent teen pregnancy, yet it refers to LGBT inclusiveness.  What does that have to do with pregnancy?  Look at the source and the words: 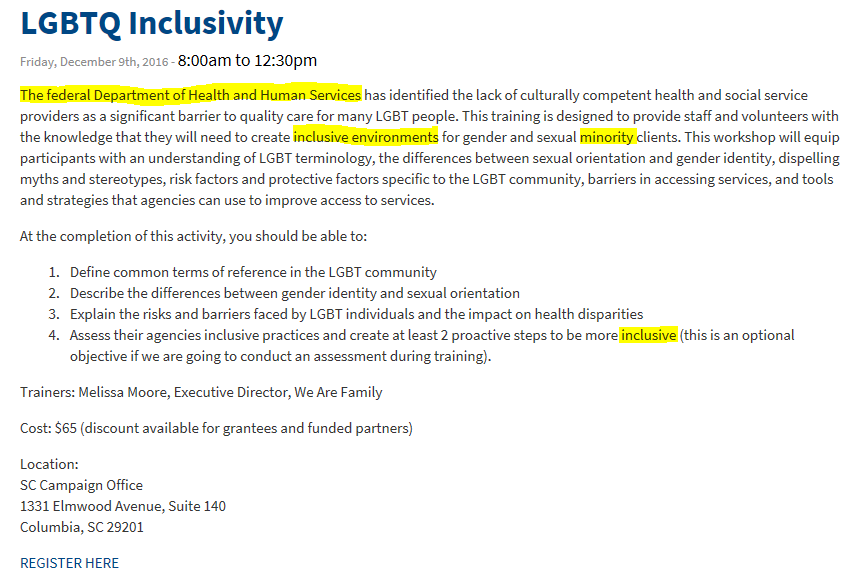 Later in the audio link to October 19th’s Governing Board meeting, Dr. Baca presents his initial draft of his Diversity and Inclusion program, citing the Constitution.  (Too bad TUHSD doesn’t cite the Constitution when supporting Common Core.)  He continues that students and adults in the district cannot be denied opportunities, using disabilities, race, and religion as some of the factors.  He shared the hiring of Dr. Cliff Moon as the Coordinator of Diversity and Inclusion.  (Teachers, how are your paychecks looking because Dr. Moon is getting some money you should be getting?)

Another alarming aspect to this diversity program is how needs will be assessed.  The answer was vague, but huge at the same time.  Dr. Baca states that they will use data.  Where will they get the data?  Is it part of the data mining associated with Common Core and mandatory standardized tests?

TUHSD’s superintendent expects the new Diversity and Inclusion program to be part of the district’s everyday work and embedded into the operational plan.  Tolerance used to be the buzzword, but he wants all members of the Tempe Union community to be appreciative of each other, not just tolerant.

Let’s see if Dr. Baca will show his appreciation for the Christian community by renaming Winter Break to Christmas Vacation on its 2017 calendar.