A look at Tucson Unified School District is long overdue.  Examining the governing board, administration, and the curriculum in Arizona’s most liberal city is a daunting task.  It can be likened to organizing the home of a hoarder–where to begin?

The first link to trouble falls on the president of the Tucson Unified Governing Board, Adelita Grijalva.  It is no coincidence she is the daughter of Arizona Congressman Raul Grijalva.  While children don’t always reflect their parents’ political leanings, research into Ms. Grijalva’s political tendencies indicates her views appear to mirror her dad’s.

Note that Congressman Grijalva also started on TUSD’S Governing Board back in 1974 and served for 12 years.  Currently, Adelita Grijalva has served on TUSD for 12 years.  Keep vigilant, Tucsonans, her term is up in 2018.  Where is her next stop?

It’s important for candidates running for any seat post their goals for the position they are seeking.  What does it tell you when a school district governing board candidate posts her goals through Planned Parenthood?

Once again, Planned Parenthood is planting seeds to grow its industry on the backs of kids, even the littlest ones.  Here is an excerpt of PP’s interview with Ms. Grijalva. 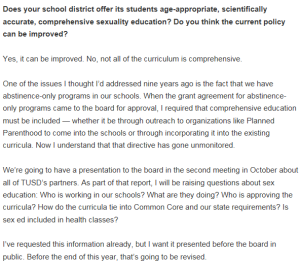 Notice all the pro-abortion (I’ll do anything for campaign money) supporters have the same talking points:

There’s that word again–Comprehensive Sex Ed.  It’s amazing the public hasn’t demanded original dialogue from those who represent us.  We accept the same talking points while the results don’t improve.

Adelita Grijalva has quite a deep resume, especially reviewing campaign finance reports that may or may not be filed on time.  Is it odd that big money from DC , some from Planned Parenthood via Winning Connections, has propped up Ms. Grijalva for a local, non-paid elected position?  Who is in whose pocket?  Why does Winning Connections in Washington, DC care about a school district in the southwestern United States?

Daddy Grijalva and his little girl, Adelita, know why, and the cycle of we the taxpayers funding Planned Parenthood so they can manipulate our families continues.