In previous posts we have discussed Planned Parenthood’s presence in Creighton Schools (Phoenix) despite SB1009 being the law of the land in Arizona.  It is not a surprise how we got to this point–more school board members supported by Planned Parenthood.  But Planned Parenthood was involved before some of these members ran for office.

Emerge Arizona is a training program for women who are registered Democrats who are considering running for office.  This is actually a great idea.  Tiffany Arenas and Jeanne Casteen are both Creighton Board members who graduated from Emerge Arizona.  Notice how many on this list are on school boards: 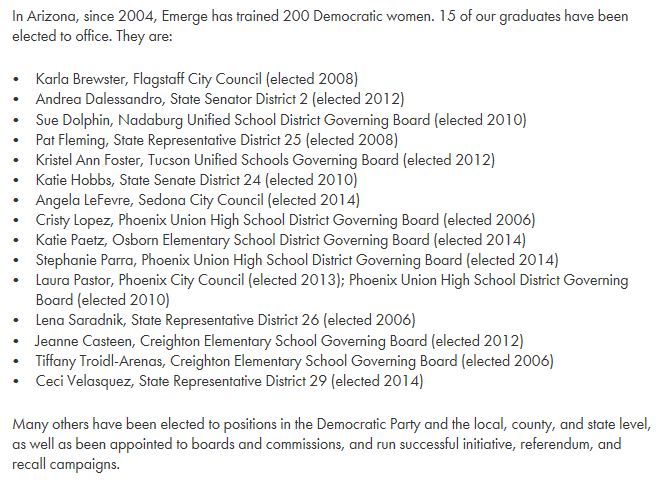 It also appears each school board has one designated Planned Parenthood advocate.  In Tempe Union High Schools (TUHSD) it was David Schapira and in Sunnyside (Tucson) it’s Daniel Hernandez.  In Creighton that person seems to be Tiffany Arenas.  This tweet was just six weeks before TUHSD contacted Vicki Hadd-Wisler to present Planned Parenthood’s sex ed proposals in their schools.

Emerge Arizona has a team of leaders, one is Jodi Liggett of Planned Parenthood Arizona,  who is tagged to do some of the training for Emerge Arizona’s candidates: 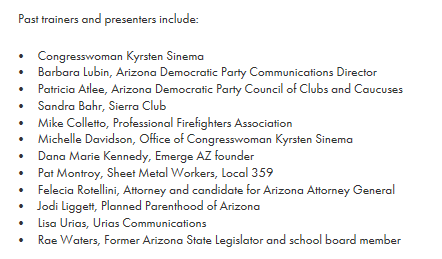 Now that Planned Parenthood is in Creighton, Ms. Arenas should be paid for her marketing skills.  This Planned Parenthood annual report is full of references to Ms. Arenas.  Scroll down to the articles titled Share and Coalition.  The Coalition with the Arizona Republic editorial board is telling.  This explains why the newspaper sent its educaton reporter, Cathryn Creno, to TUHSD meetings during the sex ed scandal and she wouldn’t report the complete story, instead choosing to ignore those citizens who had the facts instead of incorrect talking points by school district officials.

So Planned Parenthood teaches our kids and teaches future office holders.  Think about that.

Another Tucson Hero Earns a Seat in the State Legislature, Does He Wear Pink Scrubs?
Memo to Donald Trump: Planned Parenthood Has You Fooled