Although Planned Parenthood successfully broke ground in Tempe Union High Schools recently, they didn’t get everything they wanted.  It also took longer to implement than the District and Planned Parenthood officials hoped due to public outcry.  PP was exposed and the plan was delayed, which led to lost sales (abortions).

Combine that with pesky Alliance Defending Freedom who threw legal challenges at TUHSD, what is Planned Parenthood to do moving forward?  After all, its Arizona CEO, Bryan Howard, must keep his Mercedes and the Pink People must have enough money to back political candidates and visit the White House 151 times during the Obama administration. 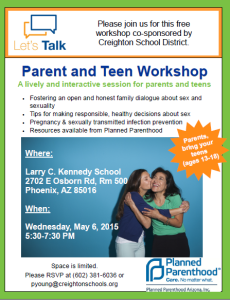 It was easy to slide in to Sunnyside in Tucson and Creighton in Phoenix.  Those districts have administrators who look the other way.  But some districts have parents who aren’t afraid to speak up and derail Planned Parenthood’s plans.

If you are Planned Parenthood, instead of comply with the law, why not change the law?  Arizona has several laws on the books regarding parents’ rights in education and what can be taught in sex ed.  The thinking is some subjects are dicey and may be best taught by the family.  This way family and religious values are honored and schools can’t push any agenda.

This month, new bills are dropping in the Arizona legislature.  Some seek to undo all the family protection Arizona currently has.  If these pass, not only will TUHSD’s sex ed be compliant, it will be mild compared to what will be mandated.  Also, Sunnyside and Creighton’s Planned Parenthood curriculum will be legal.  Phew, they are off the hook.

Arizonans, this is why the presidential race is irrelevant.  The real battle for our future is at your school boards and state legislature.  Pay attention to the bills and those who want to represent you.

Who is funding the candidates?  Who is endorsing them?  What PACs or unions are supporting pending bills?  Will these bills help your child learn to read and write?  Do they address science (reproduction is already taught in science classes) and history?  If the bills refer to sex ed, decide whether your kids need sex ed to get into college or trade school.

Ask yourself this:  If Planned Parenthood is so popular, why do they keep pushing their agenda on us? Aren’t they already successful without perverting our kids any further?  Or is Planned Parenthood realizing the public has them figured out?

Roe is 43 years old but weaker than ever. #WeWontGoBack. Everyone deserves access to safe & legal abortion. pic.twitter.com/PMD7aPqOhj