The endless saga to defund Planned Parenthood is getting old.  It’s evident enough Republicans on Capitol Hill lack vertebrae, so thankfully Abortion, Inc. will be spared and the organization can continue demanding abortion quotas of their clinics, pushing sex with one and all, and stepping into your child’s school to “educate” them about subjects that are not their business to teach.  Phew, those clinic directors will continue to rake in their six-figure salaries in many cases.

Just in case anyone is worried that $1 million dollars a day of our tax money being funneled to Planned Parenthood isn’t enough, the abortion giant has a couple additional ways to line its pockets at the expense of your kids.

We recently wrote about the Phoenix Union High School District’s (PUHSD)  invitation to Planned Parenthood to teach sex to the children in the district.  The project almost hit a snafu when the Pink People asked for a small donation to cover their expenses:

Phoenix Union’s representative let Planned Parenthood know they could not pay for sex education, but she did give it away that grant money is floating around.  Just a reminder, grant money is not free, it is money paid by our federal tax dollars.  Governments and school districts, among other organizations, request grant money regularly.  And there are always strings attached when our money goes through the maze of the federal government before landing with the recipient.

Seventy dollars isn’t a huge amount of money, but it would be interesting to know how many districts are handing it over, especially as there is currently a demand by teachers for an increase in pay.  Not to worry, the districts have an out if they don’t want an accounting paper trail to lead to Planned Parenthood: 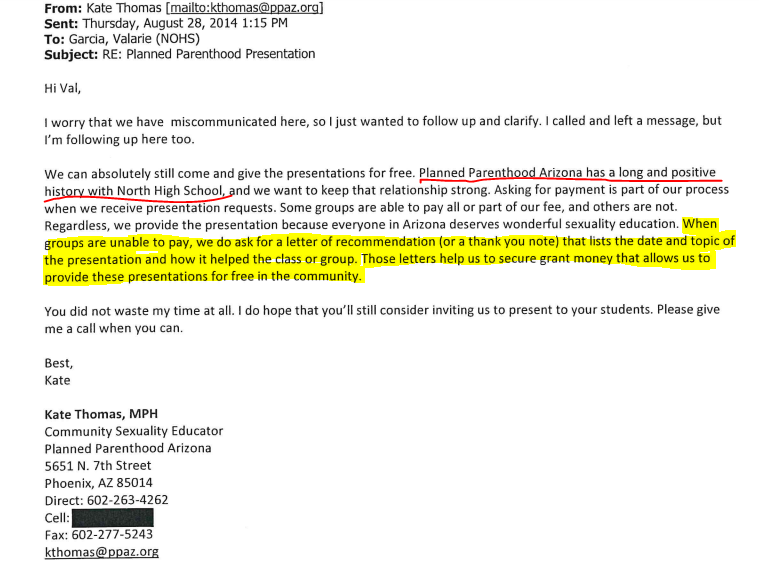 Back in 2016, Ian Danley ran to defend his seat on PUHSD’s school board, with some help from Planned Parenthood.  Here is a screenshot from an interview between Planned Parenthood and Danley during the campaign.

This interview took place in October of 2016 and Danley refers to the progressive health education policies passed the year before, which would be 2015.  Why did the FOIs we requested only go through December of 2014?  What is Phoenix Union not sharing with the public?  The administrators did not want to hand over their sex ed curriculum to review last summer.  There are obviously some close ties between PUHSD and Planned Parenthood.  How long will Phoenix Union keep it a secret?