Parents have been lulled into thinking that forking over money to send their children to Catholic school is the last best option to hold on to some moral standards in an education setting.  For the most part, this is true.  But never take anything for granted.  If you are going to spend thousands of dollars for your child’s education, it’s common sense to assure your money is being spent wisely by the recipient.

For years, the Cardinal Newman Society has documented Catholic colleges and schools which are anything but morally Catholic.  Spend any time following this great website’s research and you’ll be surprised at the groups and speakers invited to campuses, especially those Catholic institutions which are well-known for their football and basketball teams.

The lack of morals and parental control are hitting close to home in the Diocese of Nashville, Tennessee.  Recently, Lifesitenews published an article describing graphic sex ed curriculum the students are required to take at Fr. Ryan High School in Nashville.  In other words, the parents, who are paying dearly to send their children to Catholic school, have no rights to OPT-OUT of the same old Comprehensive Sex Ed those students would be exposed to at the local public high school.   Instead of allowing parents to protect their kids, Fr. Ryan High School has doubled-down and refuses to cooperate with Catholic families. Parents, Catholic or not, you never surrender your rights as parents when your kids walk through the door of a school.

The president of Fr. Ryan High states in a letter they have been teaching this curriculum for years and have received very few complaints until now.  That is no excuse.  As the Constitution has been shredded over the last decade by both political parties, a sleeping giant has been awakened.  That sleeping giant is the electorate.  When the parents at Fr. Ryan made the decision that “free” public school wasn’t adequate for whatever reason, they found Fr. Ryan High, expecting better.  These same parents realize what was slipped by them during their high school and college years, and they are living with the effects of that free-spirited, anti-family culture.  They want a better culture for their children.

The Catholic Church was very vanilla in these parents’ formative years.  The teachings never changed from the time of Christ, but unfortunately due to the social environment many priests and nuns went along with the culture instead of being a bright light in the world.  Many Catholics realize now is the time to correct errors of the past.  They expect more from their bishops, pastors, and schools.  If they don’t see a counter-cultural environment in their local church and parochial school, they will find another.  The Diocese of Nashville can circle the wagons, but the clergy and parents involved will have to answer to Someone at the end of their lives for the children they have affected.

Meanwhile, “Sister” Simone Campbell has decided to be her own Pope and offers her own brand of Catholicism to further confuse those in the pew.  She supports abortion and government “healthcare”, which is a synonym for birth control.  While she preaches for social justice and equality, it appears she’s making a nice income off her Nuns on the Bus act, books, and speaking engagements.  Keep these numbers in mind and compare her with St. Teresa of Calcutta (Mother Teresa who lived WITH the poor).

The screenshot below is from Network Education Program’s (Campbell’s political activism gig) 2014 IRS 990 forms.  Note the organization went into 2014 with over a million dollars in assets and ended 2014 with almost two million dollars.

And here is “Sr.” Simone Campbell’s part-time salary.  Who wants her income?  If she worked full-time she would earn almost $100,000/year.  Not bad for a woman of the cloth!  Not bad for anyone actually. 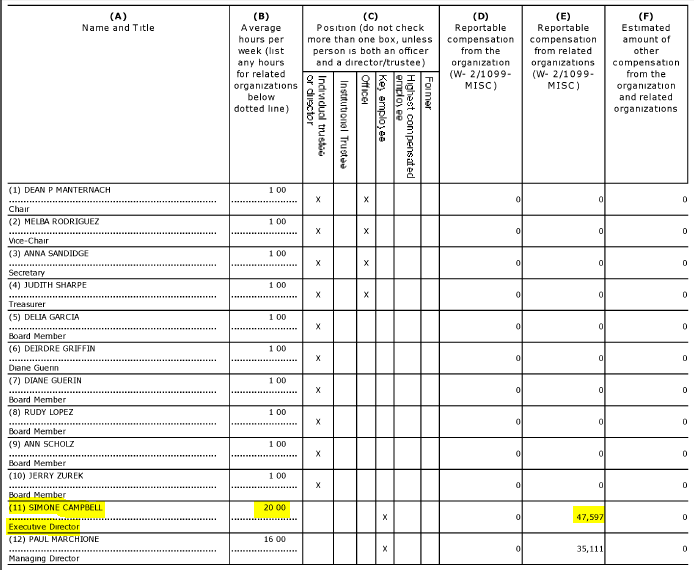 It’s clear “Sr.” Simone Campbell is using the word Catholic to amass money, power, and influence.  Those in the pews wonder why she hasn’t been ex-communicated.  It would be interesting for the Fr. Ryan High School parents to research possible financial benefits the school or Nashville Diocese may be obtaining for mandating their perverted sex ed curriculum.

Who in the Catholic hierarchy is providing cover for “Sr.” Simone Campbell and the Diocese of Nashville and why?  To those reading this, it is not meant to bash the Catholic Church.  In fact, it’s just the opposite.  Humans can corrupt the Church just as they can corrupt society.  Keep your eyes open and on Christ.  The Truth will always win.

(Those who are interested in learning from a holy nun, check out Mother Miriam of the Lamb of God.  She even wears a full habit, take that “Sr.” Simone.)

Will Anything Ever Change in Tempe Politics?
Pendergast (Phoenix) New Sex Ed Will Be Opt-In (Sorry Planned Parenthood)

2 Responses to Withdraw Your Kids From Any Destructive School, Even if it’s Catholic