There is no doubt government-run schools have become indoctrination centers rather than community hubs to educate local youth.  Only certain opinions are allowed to be expressed.  And bullying IS allowed if those in charge are confronted with an opposing thought.

Case in point, when Tempe Union High School’s administration was confronted by dozens of parents who disagreed with the district’s plans to use Planned Parenthood to propagandize the children, their opinions were dismissed.  Additionally, there were comments made that those who no longer had children in the schools had no business having a say in the matter.

Juxtapose that with the parent who got kicked out of her daughter’s Olympia, Washington school (Lincoln Options Elementary) by someone who is not associated with the school, but works with Planned Parenthood instead.   Why is he allowed an opinion if he doesn’t have kids at the school?

According to the letter below from a Lincoln Options 2013 newsletter, Jodi Bernstein (Planned Parenthood Education Manager) was a PREVIOUS parent and teacher at Lincoln.  Based on Planned Parenthood’s direction in Tempe, she should have no say anymore about anything at Lincoln.  On the contrary, she is using the school to market her product: 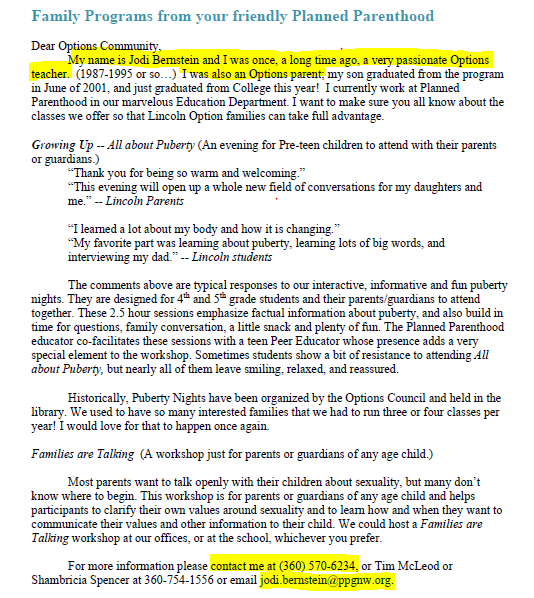 Schools are constantly promoting anti-bullying programs, in conjunction now with GLSEN and any other group who can make some money and gain publicity.  Is Lincoln going to come to the defense of the parent who was bullied by Planned Parenthood?  Or does the Olympia District bullying and harassment policy page  exist mainly to squash opinions that are opposite of the administration’s?