There is much to be concerned about with the current culture, but as adults we have only ourselves to blame for what we have done to the next generation.  For those of us who are parents or in positions of authority, we must stop pushing exactly what we say we want to prevent.

The latest example is a placard on each table in The University of Arizona’s food court on October 28, 2017. 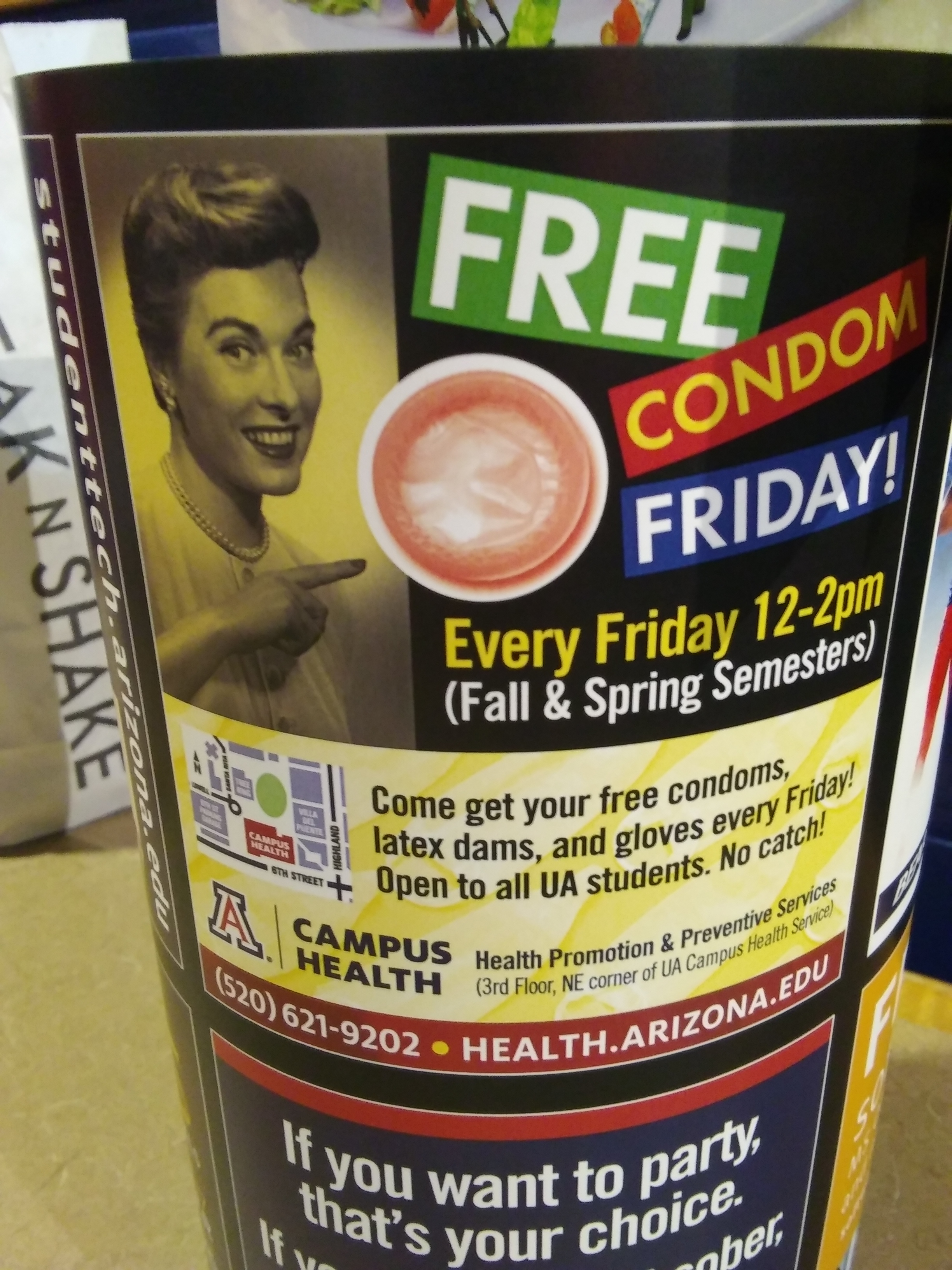 As it turns out, the University of Arizona Campus Health Department is distributing the condoms.  In fact, some of the employees have been suggesting promiscuous behavior to U of A students for years.

There are so many ironies in this saga it’s hard to know where to start.  First, The University of Arizona is a “tobacco-free” campus.  Throughout the campus there are signs posted reminding visitors not to light up.  Also, beer cannot be sold at sporting events in Arizona Stadium or McKale Center.  Both of these policies make sense if the school wants to promote healthy choices, so why does the University promote partying and irresponsible behavior that likely will lead to sexually transmitted diseases and pregnancy?  What UA Campus Health is keeping secret is the emotional scars the students, both male and female, may acquire as a result of being treated as a piece of meat instead of a whole person.

So who is behind this?  There are a couple state employees who are pushing sex for all, anytime.  The first is Carrie (Carolyn) Hardesty.  Her name appears in several articles referring to U of A sex, besides being the contact for the free condoms on Fridays.

Back in 2011, Ms. Hardesty was the contact for the “SexTalk Week.”  For those who weren’t in Tucson the week of February 7th of that year, here’s what you missed:

We can only imagine what kind of “goodies” were distributed for free.

While the February 9th event discussed pregnancy and adoption, it is clear the main focus for the students was sex.  Why did Catholic Social Services attend?  It is likely they were the agency who headed up the adoption table.  The problem is attendance by Catholic Social Services gives credibility by the Catholic Church for this entire event.  It is another way to mislead youth. 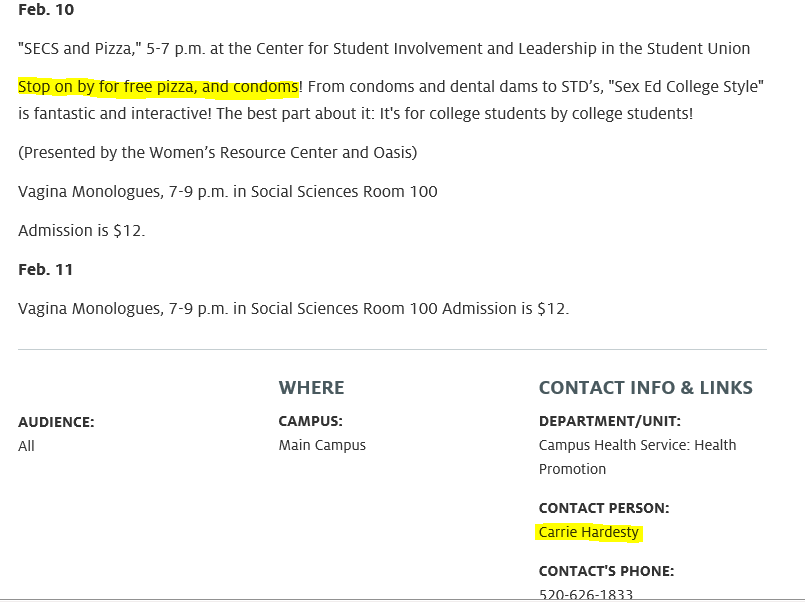 What is better than a Friday night with pizza and friends?  And free condoms?  What message does that send?  Yes, most University of Arizona students are at least 18 years old and can make their own decisions.  Many are not.  It is not unusual for a 17-year old to be a freshman in college.  Regardless, it is likely their parents think they sent their little darlings to a decent university that will guide them towards a successful career.  Instead, the kids are driven to sex and all that goes with it.  Students don’t need the responsibility of navigating a free-for-all culture without the guidance of their families.

According to the Daily Wildcat, here is Carrie Hardesty’s salary, paid for by Arizona taxpayers:

Another University of Arizona staff member responsible for sex for all is Lee Ann Hamilton.  Here is an additional link for SexTalk–this time the students are referred to Planned Parenthood, to nobody’s surprise.  Ms. Hamilton is the contact.

Here are some excerpts from Ms. Hamilton’s Linkedin profile. 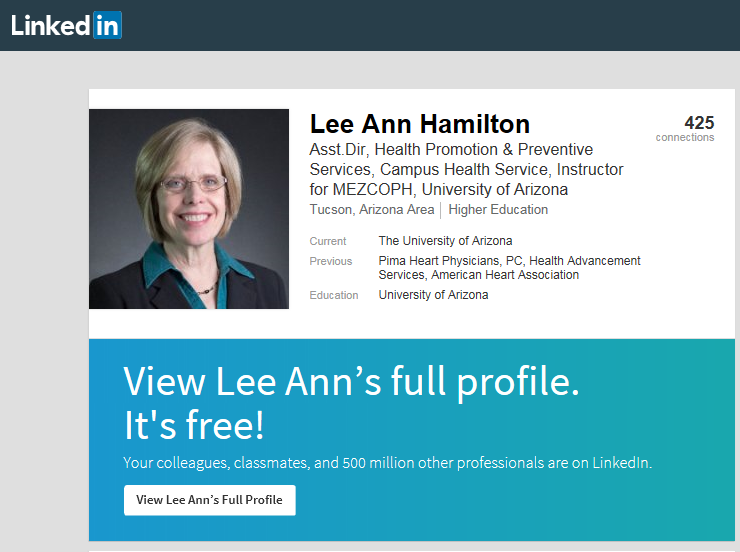 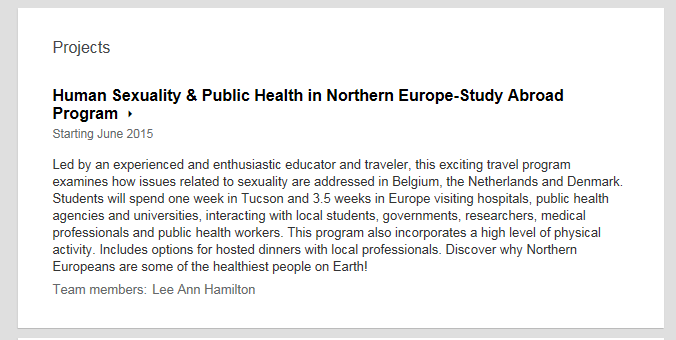 Great, she learned about sexual issues in Belgium, the Netherlands, and Denmark.  Enough said, she’s now one of the sex pushers in the state of Arizona.

Here is Ms. Hamilton’s salary, again according to the Daily Wildcat:

At a university which is known for its medical school, space sciences, agriculture research, and ecology and evolutionary biology, what is important is two years ago U of A was ranked No. 10 in sexual health.  Arizona taxpayers should be proud.  Unfortunately, Arizona fell six spots from No. 4 in 2014.  Most Arizona fans look each week to see how high the basketball team is ranked or if the football team has cracked the Top 25.  Who knew Trojan Brand Condoms is ranking schools and U of A is one of the best? 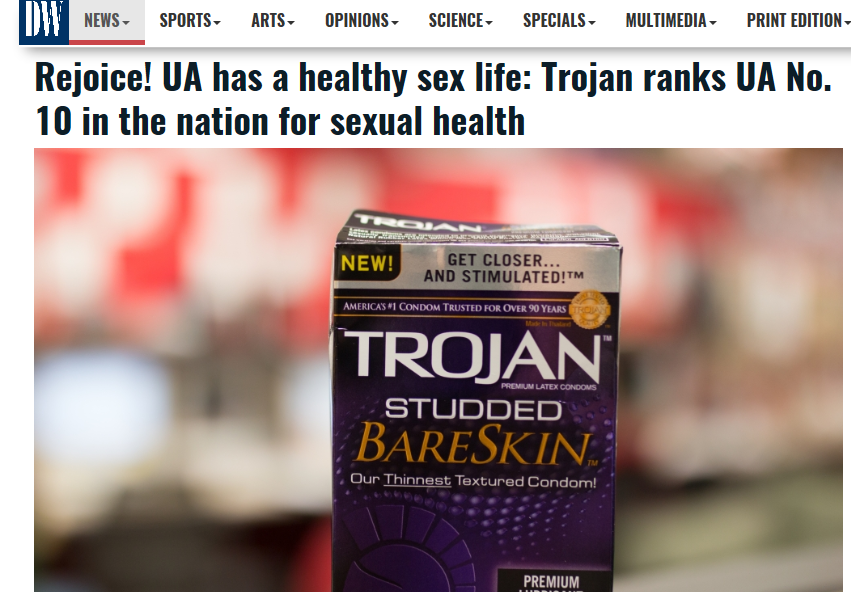 U of A’s football and basketball coaches get bonuses based on performance.  Does Ms. Hardesty get a bonus if she keeps The University of Arizona in the top-10 sex schools? 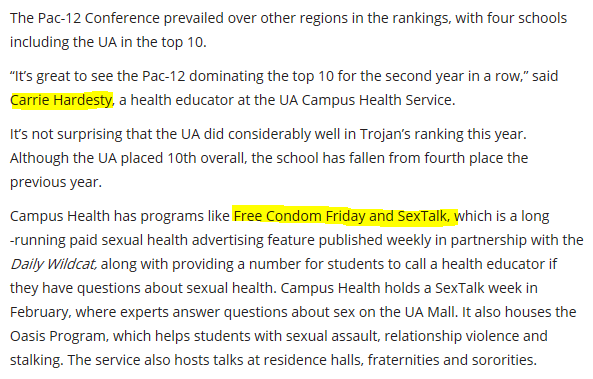 The Pac-12 is known as “The Conference of Champions.”  It looks like the conference can add another category.  More trophies for the hardware cases!

Here is an odd tweet from UA Campus Health.  The department describes the sexually transmitted diseases issue by labeling some as curable.  That is good news, but it simplifies the promiscuous behavior they are pushing on the students.

We have contacted Carrie Hardesty and asked who is providing the “free” condoms.  As of this writing, we have not gotten a response.  Unfortunately the sex industry has taken over U of A. We will continue to follow up on the sexual enablers employed by The University of Arizona.

Reading, PA School Board Election 11-7-17 and Other Updates
UNESCO and Republican Politicians in Arizona