Arizona’s Legislative District 18 is being targeted by the state Democratic Party this fall; their hope is to replace two of the three current Republicans in the legislature with Planned Parenthood candidates.  None of this is a surprise.  Arizona’s Democratic Party’s strategy is to market their candidates as the “Education” candidates.  It’s a great strategy because who doesn’t want Arizona’s kids to not succeed in school?  The problem is the Democrats never take ownership of the problems their “education candidates” cause.

Case in point is Planned Parenthood (surprise).  During the first two LD18 debate forums, both Sean Bowie (D) and Mitzi Epstein (D) promised better school funding which should lead to better results.  (Note that this argument is used constantly, and even when schools are awarded more money through taxes and overrides, it’s never enough and the Democrats continue to campaign on the need for more money.)  What was missing from Bowie’s and Epstein’s bios and debate statements was the support they receive from Planned Parenthood for their campaigns.  Is it because the truth could cost them the election?  Is that a subtle way of admitting most voters don’t want Planned Parenthood in their children’s kindergarten class?

The Arizona National Organization for Women has decided to endorse Ms. Epstein.  NOW is a fierce abortion proponent, so this endorsement underscores the great marketing campaign Planned Parenthood has to be the first to touch your kindergartners, if only Democrats like Epstein can take over the Arizona Legislature.

The  Arizona Women’s Political Caucus sounds like they would be a pal to all women in the state.  Unfortunately they are also an outreach of the usual abortion-minded groups.  Here is a list of their hobbies: 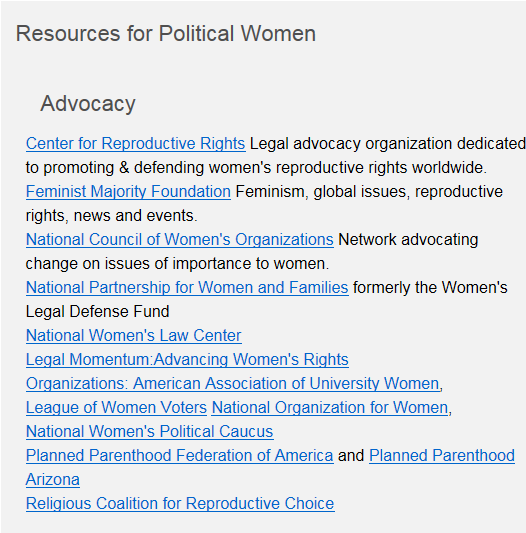 Last but not least, the third girl group in Epstein’s trio is the Arizona List.  As we have described in other posts, Arizona List is an organization which supports female candidates who support abortion.  Here’s a campaign donation from the Arizona Secretary of State’s website: 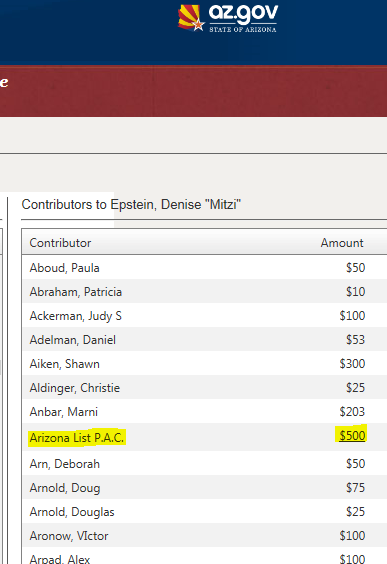 Pam Grissom founded Arizona List.  Scrolling through Ms. Epstein’s campaign donations through September 19, 2016, there is no direct donation from Planned Parenthood of Arizona.  This is clever–Planned Parenthood has all the “women’s” advocacy groups doing their bidding.  These pro-abortion groups fund Epstein and others, Epstein and company push Comprehensive Sex Ed legislation in the Arizona legislature, and Planned Parenthood is on the edge of their seats, ready to jump into each school district to provide the information that will eventually harm children and break up the family.

Arizona State Senate candidate from LD 18, Sean Bowie, is newer to the political scene.  Although he is young, he also is supported by Planned Parenthood because he has a job to do.  Here’s some pocket change to purchase some campaign signs: 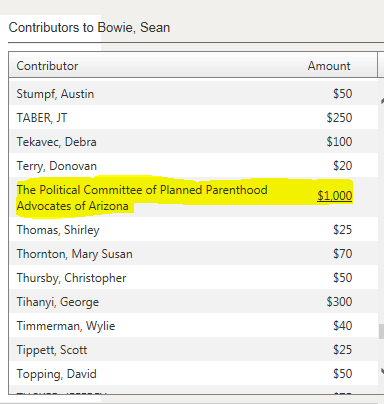 There are two weeks to go with other options in Arizona’s LD18.  Senate candidate Frank Schmuck and incumbent Representative Jill Norgaard are pro-family, pro-children, and pro-life.  The options are clear if you want to keep Planned Parenthood out of the hands of kindergarteners.