As reported in a previous article, Tucson and Pima County are under the watchful eye of the Obama administration, the Department of Health and Human Services, and Planned Parenthood.   Planned Parenthood has marched right in to Sunnyside School District in the southern area of Tucson with the help of a complicit school board and “free” money from the federal government.

A half million dollars has been earmarked for teen pregnancy prevention for five years.  This money was awarded to a mysterious community organizing organization called Child & Family Resources, Inc.  Here is their Fall 2015 newsletter bragging about brainwashing kids and then hiring them when they are of age to continue the cycle of brainwashing more children.  No wonder they need five years of funding.  After that they will need five more years, then five more, and all the while their profits will increase, and CFR will ask the federal government for more money and our legislators will award it “for the children.”

A solution to the problem of teen pregnancy will never be solved through Child & Family’s overpriced programs called Guy Talk and Grrrl’s Project.  Why?  Because Planned Parenthood is intertwined with CFR and it’s not Planned Parenthood’s goal to prevent abortion.  Page 2 of the newsletter is very telling: 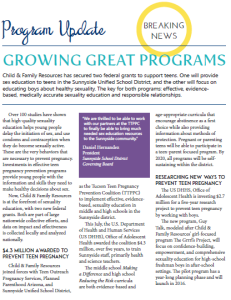 What?  They are researching new ways to prevent teen pregnancy?  Note to the government, there’s a real cheap organic way.

Why is Tucson targeted?  Well, there is a high minority population.  That falls right into Planned Parenthood’s long term plan.  The University of Arizona is central to much of Tucson socially and economically, so there are lots of potential clients for Planned Parenthood.   Let’s get them sexually “educated” in K-12, this way porn and LGBTQXYZ will be the norm, abortion will be available, and Planned Parenthood, Eric Schindler, and Vicki Hadd-Wissler will be able to drive a Lamborghini or the car of their choice to the bank.  After all, Dr. Schindler isn’t satisfied with just K-12.  His letter in the newsletter suggests his organization should spread to preschool and complains not enough kids are in preschool to begin with.  Geez, why not just hand your child to this man at birth?

How is this happening in Tucson since Arizona has a law directing what can be taught in sex ed?  Pro-life and adoption must be the emphasis of sex ed in Arizona public schools.  It’s been proven that the “Comprehensive” Sex Ed that Child & Family Resources, Inc./ Planned Parenthood teaches can’t follow the law with the curriculum they offer.

Tucson families, wake up and read between the flowery, happy rhetoric of Child & Family Resources, Inc.  Have you contacted your school district?  Have you gone to school board meetings?  Will you let your kids have access to this organization?