We have been reporting that Tucson Unified School District Board member Adelita Grijalva is funded by Planned Parenthood to push their sex ed in schools.  Ms. Grijalva has a partner on the Board to help carry her Pink water.  Kristel Foster has a political history which leads right to Planned Parenthood as well.

Kristel Foster is a member of Arizona List, an organization whose goal it is to elect pro-abortion female candidates in Arizona.  Here is a tweet from Arizona List complaining they may not be able to legally obtain an abortion.  It would seem these smart, dynamic women would know abortion is legal, so are they trying to mislead their donors?  Maybe their friends at Planned Parenthood can show these women where the nearest clinic is.

On the 43rd anniversary, we have to stand up and be counted. It is time to #ReclaimRoe and say #WeWontGoBack https://t.co/RXbv2curmh

Ms. Foster is also a graduate of Emerge Arizona, an organization that recruits and trains Democrat women to run for office.  She must be at the head of her class as she graduated from Emerge in 2012, the same year she was elected to Tucson Unified School District’s governing board.  Someone has to set the curve.  Emerge Arizona is under the umbrella of Emerge America, where Wendy Davis, best known for her loving abortion, is one of the advisors.  Here is a statement from Ms. Foster on Emerge Arizona:

One of those “critical decisions” will be this Tuesday, June 14th, 2016 when the Board debates a “policy” that will be step one for Planned Parenthood.   She has a job to do for the highly profitable organization.  The veil is being lifted as 4-d ultrasounds show more than a clump of cells and Stem Express said as much (woops) since they buy baby body parts from Planned Parenthood.  Kristel Foster must assure Planned Parenthood will have future clients as young as possible, regardless of what their parents think.

Don’t forget who trains the future female only candidates from Emerge Arizona. 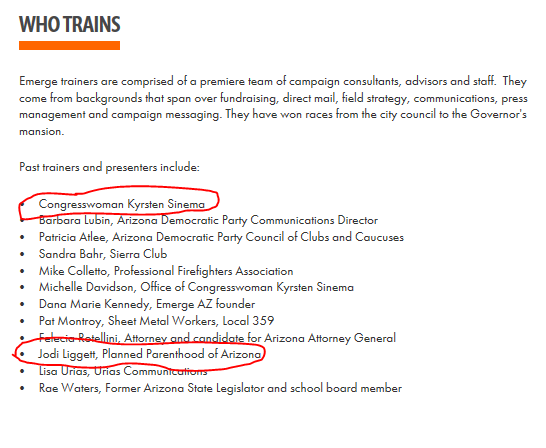 Congresswoman Kyrsten Sinema is no stranger to Planned Parenthood.  In 2014, she received $10,300 from Planned Parenthood towards her successful reelection bid in Arizona CD9.  And Jodi Liggett, well, her employer speaks for itself.

Planned Parenthood can keep spending money on politics.  We can fight them by choosing the right candidates at election time.