If it isn’t broken don’t fix it.   As usual, Planned Parenthood successfully managed to get four representatives to sit on Tucson Unified Schools (TUSD) new Sex Ed committee, because, you know, sex has changed so much since 2006 the agenda needs to be updated.  The easiest, cheapest way to gain repeat customers in Planned Parenthood’s eyes is to swoop into the schools and grab those kids as young as possible.  The plan worked again.

We do want to acknowledge that TUSD made much more of an attempt to balance the committee than Tempe Union did in 2014.  Tempe Union stacked the deck in the neighborhood of 13-1 pro-Comprehensive Sex Ed.  TUSD allowed each board member to invite two individuals for the committee, and the mixed viewpoints will be a breath of fresh air.

The biggest problem is that school board members continually fall for Planned Parenthood’s false statements.  They either are gullible, choose to ignore the truth, or are too lazy to research this organization for themselves.  Let’s hope Tucson Unified’s Board members will stand up to the loud, pink, tax-payer funded monster that calls itself a “women’s healthcare organization.”

To make it easy for them, we have attached an interview by Abby Johnson, a former Planned Parenthood director in Texas.  She made great money, received awards from her employer, had a couple abortions herself, but eventually realized the pit she had fallen into while working at that clinic.  While this interview is five years old, it is relevant because she explains the thinking behind Planned Parenthood’s marketing, bookkeeping, and ultimate goals as an organization.  Nothing has changed, except they may be more bold now that they are being exposed.  Please listen to her starting at the 8 minute mark. It’s sad so many young people who spoke at the TUSD public comment session are already in Planned Parenthood’s trap.

Meanwhile as predicted, Adelita Grijalva, TUSD’s board president appointed two of Planned Parenthood Arizona’s favorite connections.  There will be no conflict of interest, correct?

Magdalena Verdugo is one of Grijalva’s picks.  She’s a walking Planned Parenthood billboard: 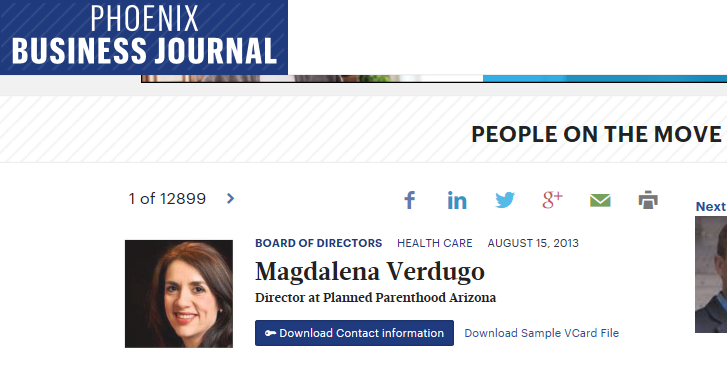 And here we go again, Ms. Verdugo’s Linked In refers to her education at the University of Arizona.  What exactly is going on there that they are spitting out so many Planned Parenthood employees? 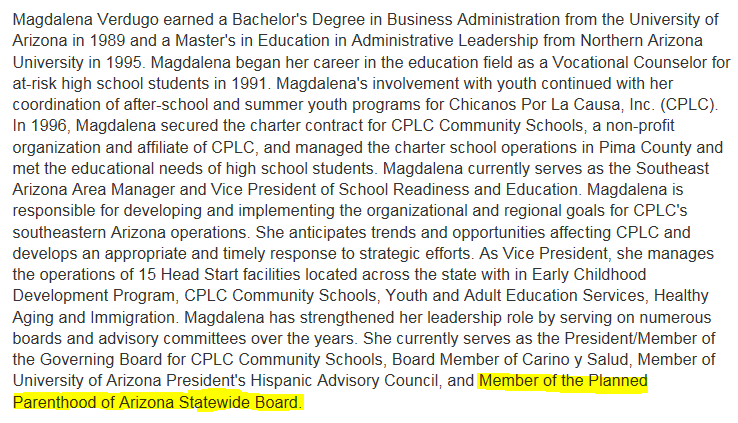 Guest number two appointed by Ms. Grijalva is Andres Cano.  He’s got a cool Linked In summary, also.  At least there is some diversity in Planned Parenthood’s administration–he was educated at Arizona State University.  It looks like U of A let one get away.  Here’s a segment of Mr. Cano’s resume on Linked In:

Note Cano’s responsibility to ensure adequate financial resources etc.  What better way?  All of those kids in Tucson Unified……He also has won an award for his LBGT efforts.  Grijalva’s pick of Cano kills two birds with one stone.  Some on the Board made it clear they weren’t happy with Arizona’s mandate that heterosexual relationships be taught as the norm in schools.  Cano will provide a challenge to this that those members more than hinted at.

Any Tucson Unified citizens who plan to provide a challenge to Andres Cano’s agenda, be prepared.  You will be labeled a closed-minded hater who probably eats at Chick fil A and shops at Hobby Lobby.  Don’t fall for their trap by defending yourself against those desperate claims.  Simply state the facts that show those who want to pervert our children have been misled and their agenda hasn’t protected the kids.

“It’s a pleasure to serve” our children.

Schools Are Used to Hijack the Rainbow
Planned Parenthood Follows Lead of Nazi Indoctrination Through Education, Will Tucson Say NO?