Three years ago, Tempe Union High Schools (TUHSD) tried to convince families they had written their own curriculum in response to an uproar from the community, but it turned out Planned Parenthood was the base of their new materials.  Since that vote at the end of 2014, things seemed relatively quiet and word on the street was they didn’t want to push any more buttons.  Smart.

However, things may be changing, especially since the makeup of the current school board is different than 2014.  Only two of the five current Board Members approved this curriculum.  On November 13, 2017, TUHSD’s Governing Board held a Summit in the district office.  One of the items discussed was curriculum, including the current sex ed curriculum.  Health teachers from the district’s schools were invited to participate in a question and answer session so the Governing Board could assess the status of the sex ed implemented in 2014.

While the public was invited to the Summit, the public definitely wasn’t welcome.  The room was set up so the teachers’ backs were to the audience, as was the district’s curriculum director, Kim Hilgers.  None of them had microphones so their answers were garbled.  Here is a clip from a Tempe resident’s email to the Board:

Because of this, we placed an FOI request for complete minutes of the summit.  This is all we received. 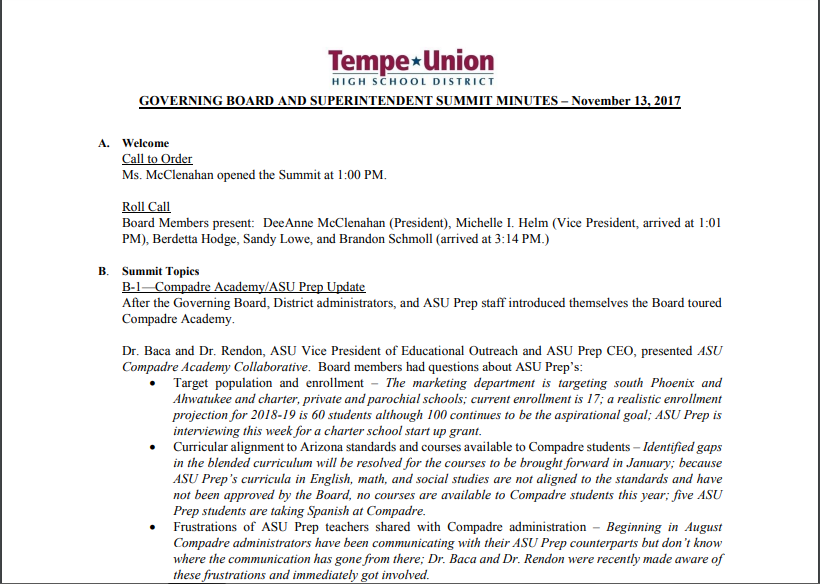 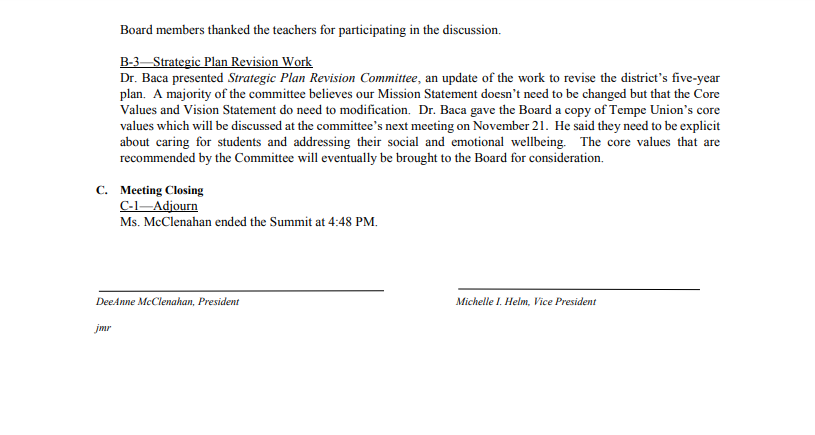 This synopsis isn’t very informative and does not reflect the troubling comments made by some of the board members.  It turns out that although the words “Governing Board Meeting” are used on this recap, the Summit was not an official governing board meeting, thus they don’t have to record it or provide detailed minutes, so they say.   So much for transparency.

We then requested another FOI to see if we could get additional details about this Summit, especially the time spent on sex ed.  We still did not receive details of the meeting, but we did get quite a few emails that lay out the prep work involved to discuss sex ed at the Summit.  The answer to this FOI request took over three months and we finally got TUHSD’s response when a taxpayer who works in the IT field called the district and explained how simple and easy the process is to retrieve pertinent emails. 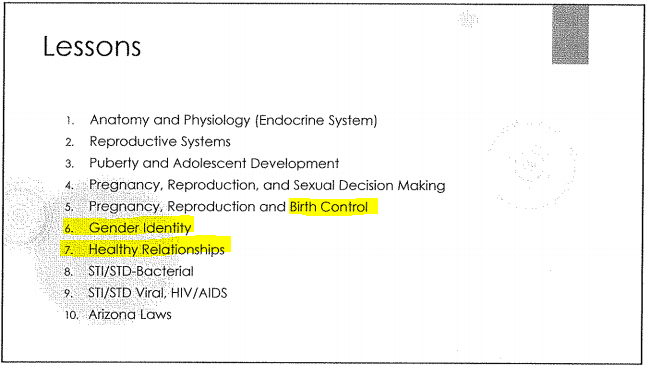 While it is important Tempe Union is carefully assessing their sex ed, we again must ask why so much time and energy is being spent on fluff, especially controversial fluff.  An accountant would have a heyday breaking down the number of hours spent on the power point and the emails sent in preparation.  These are well-paid public servants.  Is that what we want our tax dollars to fund?  We know now that gender identity and healthy relationships really is a cover for promoting LGBTQXYZ, which is also not allowed in Arizona schools.  All the puberty, anatomy, physiology, and reproduction are covered in high school science textbooks.  Birth control is a touchy subject, and not the responsibility of teachers.  Of course, if sex wasn’t pushed on students from every angle, especially adults in the position of authority, the amount of STI/STDs would drastically decrease.  This would give Planned Parenthood one less hook with which to grab the kids.

But what wasn’t hard to hear were the questions and comments by Superintendent Kenneth Baca and the Governing Board–they were facing us.  Some of the comments are troubling.  It appears Board President DeeAnne McClenehan is pushing for more content in the curriculum.  She mentions Planned Parenthood’s FLASH has more birth control information.  Also, she questioned Dr. Baca when he stated they had to watch the wording of the IUD content when they were adapting FLASH to Arizona law.  Why is Mrs. McClenehan pushing so much?  She was on the sex ed committee in 2013/4, she learned Arizona state law.  Why is she purposely trying push the envelope?

During some back and forth, there was discussion about stressing waiting to have sex until the students are mature adults.  There was no mention of waiting until marriage.

An eye-opening discussion ensued between Mrs. McClenehan and Board Member Michelle Helm.  Mrs. McClenehan offered the idea of helping students learn the access and cost of birth control.  Mrs. Helm disagreed saying there is a fine line and that is stepping over boundaries.  McClenehan took it upon herself to declare 90% of parents must assume the district is giving the students this birth control information if they opt in.  It is clear Mrs. McClenehan has a job to do as TUHSD Board President.  Will her next campaign be funded by Planned Parenthood?  Will they send their volunteers to assist McClenehan if she can get Planned Parenthood deeper into Tempe Union?  What other motive might there be?

It gets better.  One of TUHSD’s newest board members, Berdetta Hodge, appears to have no idea about state law and values held by many in the Tempe community.  Ms. Hodge agreed with Mrs. McClenehan as far as the district providing more birth control information rather than less.  But even that wasn’t good enough for Ms. Hodge.  She went on to declare “Sex Relieves Depression.  Sex can affect the suicide rate–if kids have sex they may feel better about themselves.  Sex is companionship and love for some students.”  (Note that this could fall into the Healthy Relationship category on the power point slide above.)

Ms. Hodge wasn’t done.  She wants sex and gender identity to be treated as mental health issues in TUHSD.  She then stated she would fight the community for what is best for kids.  Hodge also stated pediatricians don’t discuss birth control with the students, so TUHSD should.  What?

Ms. Hodge may be the best reason we did not receive a full synopsis of November’s Summit.  Currently there are three TUHSD Board members who may hold the line and they are Michelle Helm, Brandon Schmoll, and Sandy Lowe, based on their comments at the Summit.  Mrs. Lowe stated “This takes so much time and energy every few years.” Perhaps she and Mrs. Helm realize the slippery slope they created when they voted for this FLASH curriculum in December of 2014.  Now Lowe, Helm, and Schmoll (he was not on the board three years ago) need our support as they will be bullied by Planned Parenthood supporters who want more sex in schools.