The Tempe Union High School District (TUHSD) tried hard in 2014 to hide the fact they decided to use Planned Parenthood for their new sex ed curriculum.  Despite denials by the Governing Board and administration, Planned Parenthood showed up in the teacher’s manual.  The media went away and a new set of students have matriculated into the district so the issue has been swept under the rug.

The TUHSD employee who contacted Planned Parenthood in 2013 to invite them into the district works at Compadre High School, the district’s alternative high school.  That employee was Ms. Bronwyn Paes, and she continues to run the school’s teenage pregnancy program.  Simultaneously, TUHSD is using our tax money to refer its students to Planned Parenthood. 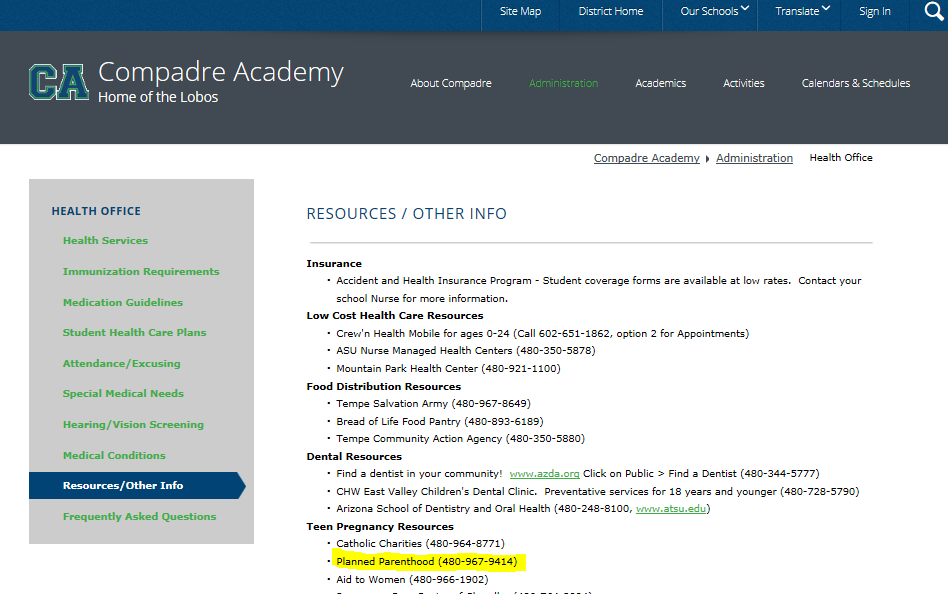 Some may ask why it is okay for the district to refer to Catholic Charities and Aid to Women Center (a nearby pro-life pregnancy center) and not Planned Parenthood.  Anyone with any doubts should listen to this audio recording of four former Planned Parenthood/abortion center employees.  The audio is almost two hours long, but the first 20-30 minutes will give the listener the general idea of the atmosphere the workers left behind.  A clear line can be drawn between Planned Parenthood’s “care” and the care and understanding of pro-life pregnancy centers.

If Tempe Union thinks they are helping the students to get out of a “situation” by printing Planned Parenthood’s number on one of their websites, they certainly aren’t concerned with the whole girl, her family, her child, and her long-term physical and emotional consequences.