We had a short break from political campaigns in most locales, but now we are gearing up for 2018, especially some elections that are purposely held at a different time than the general election next year.  Welcome back to the City of Tempe, whose City Council primary is next March.

Readers might be wondering what a city council election has to do with Planned Parenthood in schools, but now all have merged in Tempe.  The City has just started its own free-to-the-users-but-not-the-taxpayers preschool. The Council Members involved tout the preschool as being free for needy students.  As a result, three and four year-olds will be under the direction of a very Planned Parenthood-friendly Tempe City Council.

Meanwhile, there are three seats up for grabs in the spring of 2018.  Candidates have started their campaigns, and one newcomer has a resume to be concerned about, if you like kids.  Genevieve Vega recently posted on Facebook she is endorsed by Arizona List, an organization which supports pro-abortion female Democratic political candidates.  (We are curious, does Arizona List hate men since they only endorse women?) 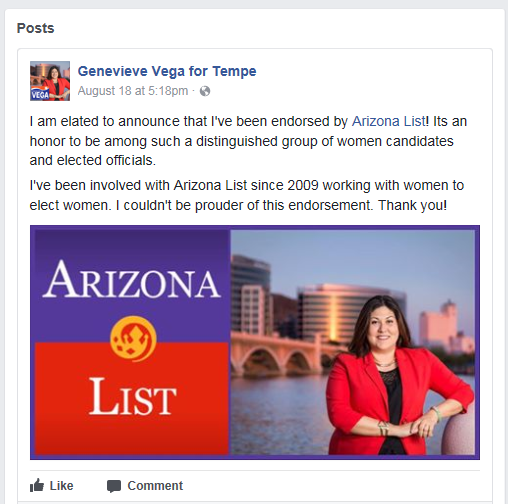 Vega states in her website her concern for the plight of Down Syndrome children and she describes what a joy they are.

Mrs. Vega wants the City of Tempe to be open to the Down Syndrome kids’ needs.  Note she mentions “they struggle finding places to fit in.”  That is ironic.  She supports abortion, and one of the reasons abortion is suggested for mothers is the child may have Down Syndrome.  Maybe Mrs. Vega hasn’t seen this recent article about Iceland and its quest to completely eliminate Downs kids via abortion.  So Vega is correct, Down Syndrome children do have a challenge finding places to fit in–under her watch they may be killed.

Back to Tempe’s “free” preschool, this is one reason why we are wary of Tempe being in the preschool business, especially with the current Council Members and Council Candidate Genevieve Vega.  How will she say NO if Abortion, Inc. (Planned Parenthood) comes along and wants to teach sex ed to the city’s kids?  Abortion is Planned Parenthood’s main source of income, which is what Arizona List is all about.  There are laws in Arizona protecting students from Planned Parenthood’s curriculum, but they are ignored much of the time.

Let’s hope some new faces come along to run for Tempe City Council, some who use some common sense, don’t base their candidacy on talking points, and most of all protect the City’s children.

Document Sent Home by Tempe Elementary Should Have Arizona Residents Concerned
What is Really Being Taught in Phoenix Union’s Sex Ed Classes?