For those not keeping score, the Governing Board of Tempe Union High School District (TUHSD) took a vote in early December 2014 and the results led to the implementation of their new Sex Ed curriculum.  The original plan was to fast-track one of Planned Parenthood’s curriculums through the system, most likely Family Life and Sexual Health (FLASH). Because of the uproar from the community and a possible legal issue, TUHSD decided instead to use FLASH as a framework and develop its own curriculum around it.

Simultaneously, a citizen downloaded the new Sex Ed teachers’ manual TUHSD had posted on its website.  Throughout 2015, several members of the community have questioned whether Planned Parenthood did indeed get more than its “framework” in the door.  It is confusing because they are reading posts on this website then questioning district officials who tell them not to worry, Planned Parenthood is not in TUHSD, they developed “their own” curriculum.

Recently, this same citizen asked to review TUHSD’s Sex Ed curriculum.  He brought the Planned Parenthood manual with him he had downloaded off the district’s website back in December.  It matched the current teachers’ manual the district is using, and Planned Parenthood’s logo is all over it.

But don’t try to find the manual on line now.  Not wanting to be Hansel and Gretel and leave a trail, someone has assured the link is no longer working.

That’s okay because notinourschools.net has a hard copy and will share some of the material  Planned Parenthood is teaching the kids in Tempe, AZ. 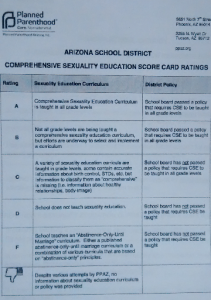 Question: Why does Planned Parenthood have any right requesting a school district fill out a score card for Sex Ed?  Shouldn’t PARENTS be scoring a school district on reading, writing, math, science, and history?  What exactly are this culture’s standards for education?

Page 2 and 3 is the Planned Parenthood Response Form sent to each school district.  Did TUHSD answer it?  If so, who signed it? : 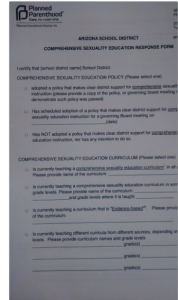 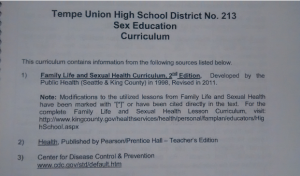 Why did TUHSD Board Member DeeAnne McClenahan tell a citizen at an education forum in July  2015 Planned Parenthood isn’t in the mix?
Why did Michelle Helm tell a Tempe resident TUHSD is not using Planned Parenthood, implying information to the contrary is wrong?
Why did Superintendent Kenneth Baca deny any ties to Planned Parenthood?
What else is Tempe Union hiding?