There is clearly too much money flowing into the education system.  Yes, there is too much money flowing into the education system.  If adults who “care” really want to teach children and prepare students to survive in the world, they would use their free-flowing money, resources, and time on actual school subjects like math, reading, science, social studies, and fine arts.  Instead, public schools are squeezing these subjects into the school day while somehow finding enough spare time to use kids as social experiments while lining the pockets of the perpetrators.

At one time we thought there was only GLSEN to worry about influencing our students inside the school walls behind our backs.  But those who want to break down the family using children really never stop.  Now we can directly point to the National Education Association (NEA), the largest teachers’ union in the country, as a critical source for family breakdown.  Recently the NEA had their annual meeting.  They successfully interjected the personal agenda of the NEA’s director, Lily Eskelsen Garcia.  Ms. Eskelsen Garcia does not like the current administration and she made it clear during her speech at the union’s meeting in Minneapolis in June of 2108.  Very well, she is entitled to her opinion.  However, it is not her job to mandate that the teachers within the union go with HER flow for fear of losing their jobs.

No matter where you live in the United States, be aware of what will be coming to your public schools.  According to LaborUnionReport.com, this video was approved by Lily Eskelsen Garcia and her minions at the June meeting. (After clicking the video link, scroll towards the bottom to see the no-gender video and Ms. Eskelsen Garcia’s hate towards President Trump.)

Look at how young these children are.  These innocent, beautiful children belong to their parents, not Lily Eskelsen Garcia. 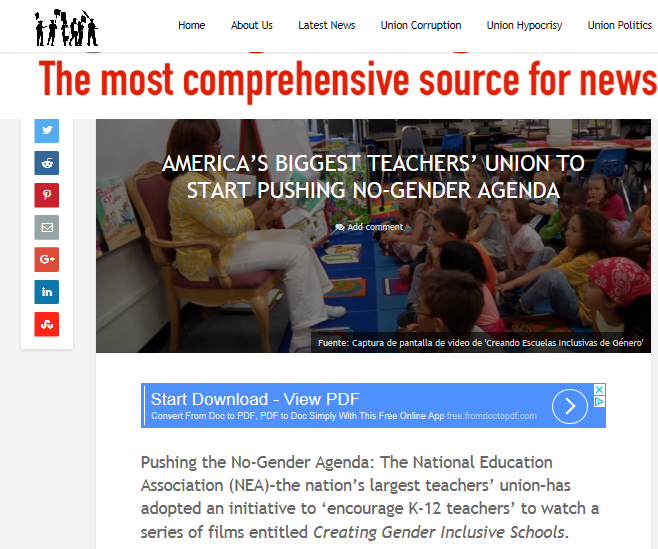 If there was free time in the classroom that day, they should have been doing an art project, reading a book, or–sit down for this suggestion–playing on the playground.  Instead, these teachers who the kids adore are corrupting them.  Do their parents know?  Can the teachers express to their administration they aren’t comfortable with this, especially the science teachers who are aware how the X and Y chromosomes work?

Here is the important mandate by your childrens’ teachers union. 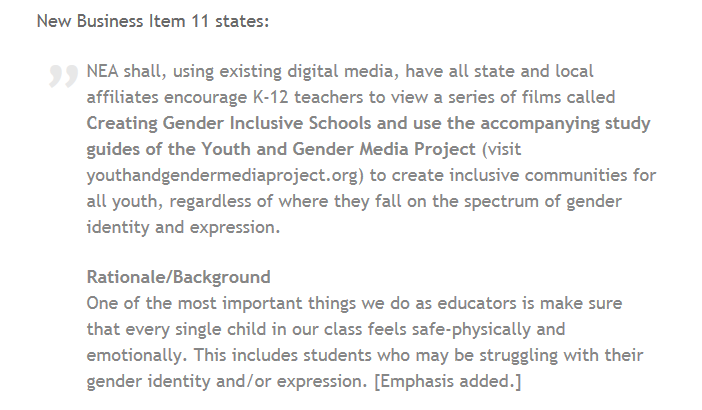 Notice the “educators” are to make every child feel safe physically and emotionally.  This December a Christian student should ask to sing “Silent Night” in the school’s Christmas Concert.  When that student is denied, he should declare he was emotionally abused for not being able to express his Christian identity.

So who is this organization that put together these videos?  Youthandgendermediaproject.org is another miscreant somehow allowed access to our kids.  Just a quick look at the front page of their website tells us all we need to know.  Unfortunately for the children, youthandgendermediaproject.org is another anti-science group that somehow is gaining entry into our public schools.

Youth and Gender Media Project is located in Los Angeles.  How do they get the money to afford southern California rent among the other expenses involved in creating films?  Here are their donors:

One of the strategies of the other side is to pull people in from all walks of life using animals.  From there, those groups can branch into sometimes radical avenues with the support of their new audience and financial connections.  One of those is the Arcus Foundation, which is funding the Youth and Gender Media Project.  Arcus has a very diverse set of goals. 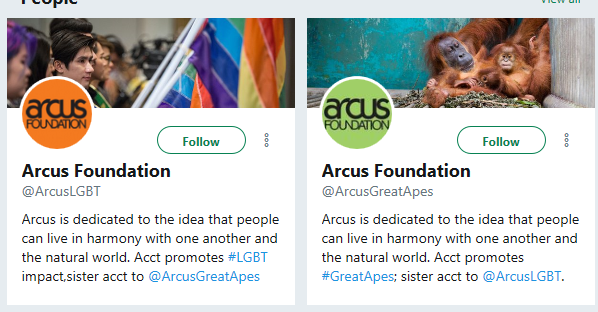 Does this mean if parents don’t want the LGBT anti-science agenda in their child’s classroom they hate animals?  Do those who want to support nature have to cross over to the make-believe world of no gender?  There is a special conference looming in Palm Springs (what a surprise) in September.  It’s advertised for journalists, but look closely–educators are invited.  How many from Arizona will attend?  We hear teachers in Arizona have no extra money, they are living hand to mouth.  Will they be able to afford a trip to expensive southern California?

We reviewed Arcus’s 2016 IRS 990 filing.  It reads like a movie–entertaining, even funny at times, but with a sad plot.  Readers from states who are inundated with #InvestInEd and #RedForEd, you should be furious because many of your educators and policy makers are telling you education needs to be fully funded and teachers need to make more money.  They run to the ordinary taxpayers and business owners pounding them with guilt trips and using their own children as props to push for an increase in taxes.  Well, Arcus is having no problems making money.  And as we noted above, they are dumping it indirectly in schools.  Imagine if the money they are making was directed to teacher salaries and maintenance in aging school buildings.  Here are a few examples: 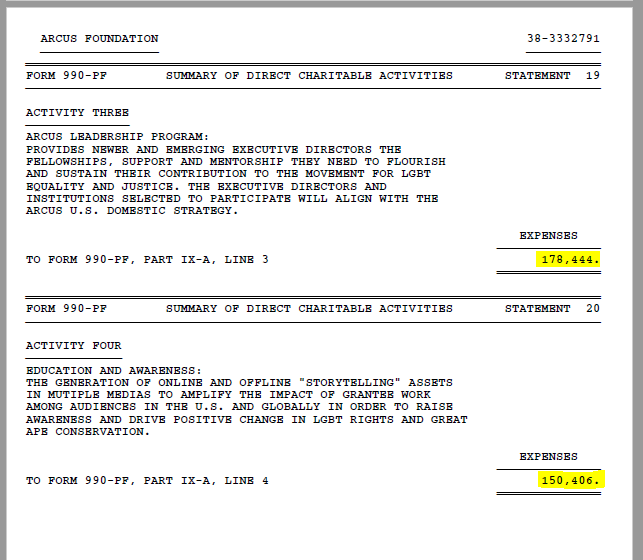 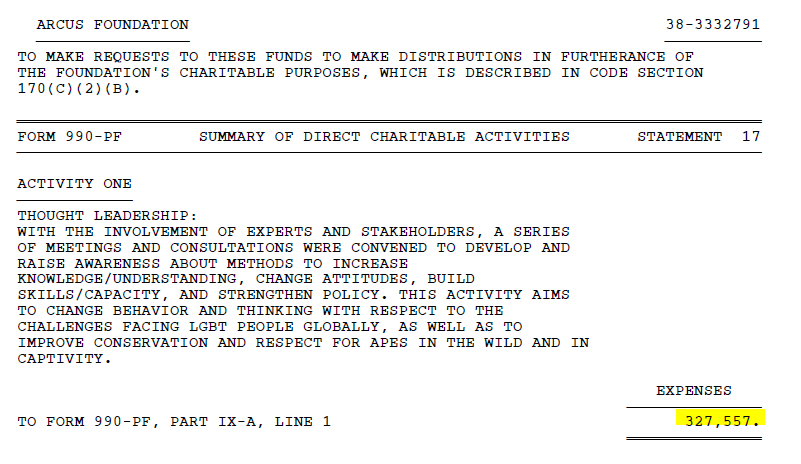 How does Arcus make money?  Many candidates are campaigning that business are bad and rip people off, and feel profits should be regulated and extra money should go towards funding education.  It is ironic Arcus is making lots of money off of a plethora of big businesses.  Remember hearing Big Oil is bad? 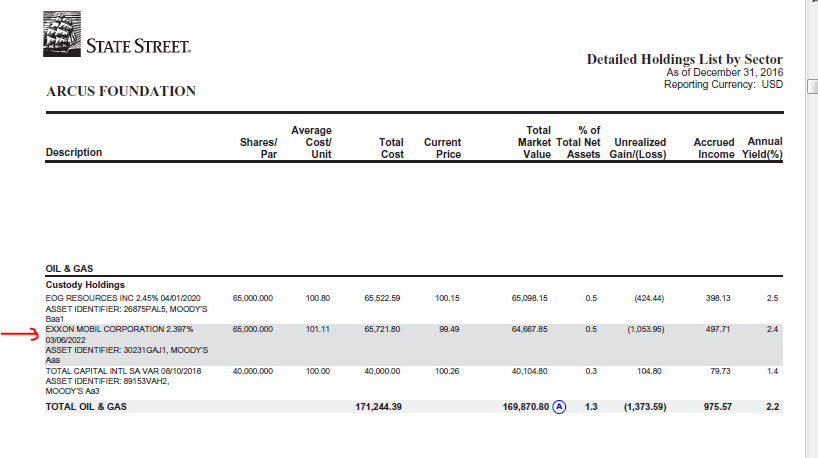 Here are some additional “bad” big businesses Arcus has financial ties to:

And don’t forget when school administrators do the right thing and remove all those terrible beverages from school property.  Well, those same beverages are good enough for Arcus:

For more entertainment, here are a few screenshots reflecting who Arcus’s grant money is shared with.  Of course, the fake Catholics who make up the group “Catholics for Choice” got a nice check.

There is no reason to leave Muslims out, after all they are pro-family so Arcus is providing an even larger check to a group of Muslims at a well-known college.

While Arcus is at it, they need to make sure all religious leaders in general who preach the science of natural marriage get corrupted.

Recently we wondered where GLSEN got their money to pay their high rent in New York City.

The 2016 Arcus tax report is very long, but it does make for good reading.  For more entertainment, here is the link.  Suffice to say, there is plenty of money to pay teachers adequately and fund classrooms.  Unfortunately the Big Business of the LGBTQXYZ industry is hoarding the money and re-circulating it among themselves.  They have created a “problem”, found they can make a nice living off of it, tug at heart strings for votes, and grow government from guilt.

Who are the winners and losers?  Kids lose.  Parents lose.  Teachers lose.  Society loses.  The country loses.  The LGBTQXYZ industry wins.  So which should be in schools, a vending machine with cans of Pepsi and Dr. Pepper or an Arcus-produced movie which tells kids that boys and girls are make believe?