Thank you to Senator Catherine Miranda (LD27)  for standing up to Planned Parenthood despite pressure from her political party and her own family.  What happens when a Democrat, especially a female, just says no?  Planned Parenthood will attack her and throw her under the bus by twisting the truth.  Here are a few jabs aimed at Senator Miranda:

Basically whether Senator Miranda is for or against abortion, her support of requiring abortion providers to have admitting privileges at a nearby hospital in case of an emergency is considered restrictive by the country’s largest abortion provider.  How is that?  HB 2036 protects the woman, and Planned Parenthood says they are all about “womens’ health.”  And how dare Miranda oppose killing a 20-week old clump of cells that has all its human body parts, including a beating heart, enough complete body parts for Planned Parenthood to harvest and sell to Stem Express for a  profit.  How can Planned Parenthood NOT support HB 2036 if they really and truly want abortion safe and rare?

While abortion based on sex or race may not be a problem in Arizona (according to Planned Parenthood), it is a problem within the organization.  Planned Parenthood targets minorities and was started by Margaret Sanger, who wanted a “pure” race.  As a Hispanic, Senator Miranda showed sensitivity to her heritage and other minorities.

Planned Parenthood gave Senator Miranda a failing grade.  Good, that means NotInOurSchools gives her an A!  Thanks for not drinking the pink Kool-Aid.  But as is Planned Parenthood’s way, it breaks up the family and comes between mothers and daughters, this time in a unique way: 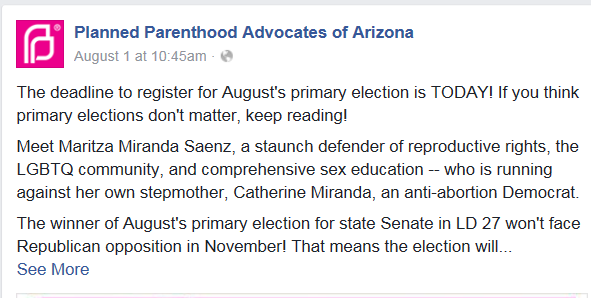 Yes, Planned Parenthood has made sure they got their candidate, one who will carry their pink water and say all the right things.  Notice in Miranda Saenz’s endorsement a comment is made about how slow Comprehensive Sex Ed indoctrination is occurring in Tucson Unified Schools.  An then there’s the bonus endorsement from Arizona List, an organization which supports Democrat women who support abortion.

Who chairs the Arizona List?  Pam Grissom is a founder and Chairperson of the organization.  No surprise here, she’s another product of The University of Arizona.  Ms. Grissom was a member of the Women’s Studies Advisory Council at Arizona.  It’s pretty evident what they are advising.  Are you sitting?  Ms. Miranda Saenz received some nice donations from Pam Grissom according to the Arizona Secretary of State’s website:

So Democrats in LD27, your choice is clear this year.  You have a pro-family, pro-life candidate in Catherine Miranda or her stepdaughter who has taken it upon herself to choose which lives matter.  You make the choice.