It’s often stated the youth of today are the pro-life generation because they have access to ultrasounds that weren’t in existence years ago.  Not only is there a clear window on the tiny baby in utero, these kids are directly affected by their missing siblings, aunts, and uncles due to the abortions of family members.

What is Planned Parenthood to do when they are not only killing off their future customers, but the surviving ones are outsmarting them?  They embark on a massive propaganda campaign, using the kids themselves to deliver it.  They may use the students as mentors right in your child’s school or after school program, paid for through government funding.

A good advertising campaign plants a subtle seed that a product is needed.  But Planned Parenthood isn’t so subtle.  They produce videos narrated and acted by the kids who demand Comprehensive Sex Education of school districts, while implying the adults in the room just can’t do the job.  Check out this list of videos educators can purchase as part of curriculum through Planned Parenthood.  When a school district bows to the demands of this indoctrinating money-making organization, do they tell parents about the links and additional media that accompany the “healthy” sex ed they are teaching?  Tempe Union High Schools displayed their sex ed curriculum (which is actually Planned Parenthood’s FLASH) for parent review, but there was no access to the links to other education materials suggested in the curriculum.

There are a couple age 17 movie restrictions.  If you are over 18, check out this movie trailer which was obtained from the Planned Parenthood videos linked above.  Don’t let your kids watch this, it is not safe for them to see according to the Motion Picture Association of America ratings system.

Instead of letting your kids see the video clip, send them to a school with Planned Parenthood’s influence and let them watch it with their friends.

The attitude “We will do whatever we want” was on full display during public comment at Tucson Unified’s Board meeting on June 14th, 2016.  The debate surrounded changing a policy in order to develop a new sex ed curriculum.  In order to appear to have enough support, Planned Parenthood’s youth paraded to the microphone to voice their needs.  The first blatant irony was before anyone can speak to the Board, they must state their name and address.  However, it was noted that since these children were minors, for their safety, they did not have to state their address.  They can demand adult information from the adults in the room while the adults in the room tell them they are too young to represent themselves as adults.

One of the minors stated that Comprehensive Sex Ed will provide solidarity with minorities and LGBTQ individuals.  Isn’t that also found in Christianity?  But Christianity isn’t allowed in public schools.  Remember which restaurant chain provided free food the day after the Orlando terrorist attack on a gay nightclub?

Regarding the rumor that Comprehensive Sex Ed leads to a better chance to achieve a higher education, is there discrimination on college applications?  Do they not accept students who graduated from districts which don’t use Planned Parenthood?  Does Comprehensive Sex Ed teach how to get good grades, achieve in school, and be involved in extracurricular activities so colleges will be interested in having the student in their community?

This same student told the room that sexual urges are natural.  She basically equated humans with animals, animals who survive by instinct over manners.  Some people find their craving for chocolate is natural.  Or even alcohol and tobacco.  Do we encourage restraint from behavior that may hurt ourselves or others or are we like animals with no conscience?

She went on to state that kids don’t listen to parents and rebelling against them is natural.  This is a classic trick by Planned Parenthood to get in between the kids and their guardians so they can be the go-to organization.  This is their first attempt to break up the family.  This statement subconsciously encourages the rest of the students in the room to not listen to their parents.  It raises Planned Parenthood above the family unit.

Here’s another way Planned Parenthood intercedes in child rearing.  Do your kids have a cell phone?  Better yet, do they have one of those tablets mandated by your school district?  Here’s a fun game they can download, whether you want them to or not and whether it’s against local laws or not: 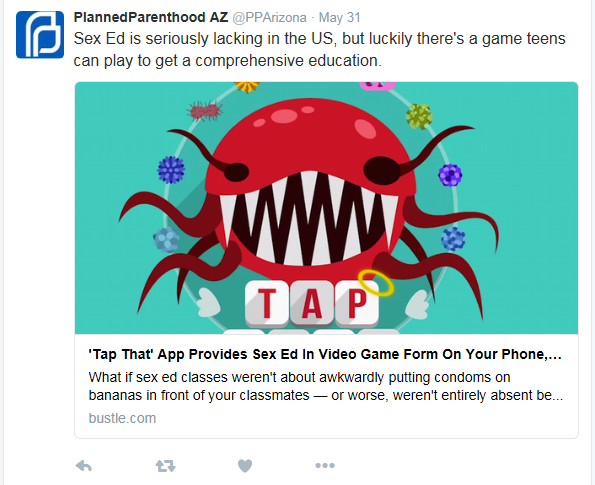 If kids don’t listen to parents, then why do we waste our time telling our kids not to smoke or drink?  Why do we tell the kids to do homework?  Should parents just throw in the towel and defer to Planned Parenthood?

One of the youth who spoke announced that parents just don’t have the tools to teach sex to their kids.  Who says that?  Who decides parents don’t have the “tools”?  Check out where he got that talking point, a quick google search nails the guilty party:

However,  children sure seem to think their parents have the “tools” to teach them to drive, help them with homework, schlep them to and from band practice, earn a paycheck that puts food on the table, and plan and finance fun vacations.

One of the speakers stressed morals and values should be taught in the home only, schools exist only to teach facts.  Very well, should students be allowed to cheat on tests?  Is that a fact or a moral standard?  Better yet, dump all those LGBTQ clubs and diversity acceptance programs in public schools.  Bullying should only be judged at home.

The more Planned Parenthood talks, the more they step in it with their pink feet.

2 Responses to Planned Parenthood Kids and Their Inaccurate Marching Orders