In a recent post we described Tucson Unified Schools Board President Adelita Grijalva’s Planned Parenthood appointments to the new Sex Ed Committee.  Her partner on the governing board, Kristel Foster, has made a curious appointment herself.  Ms. Foster has been vocal about her disagreement with the State of Arizona’s statute mandating heterosexual relationships be taught as the norm in public and charter schools.

One of Kristel Foster’s appointments is a young lady named Deja Foxx.  Of course, Ms. Foxx is one of the students demanding sex ed in the district, assuming it’s the responsibility of schools to teach an agenda (remember, reproduction is thoroughly taught in Biology and Anatomy classes).  This benign article makes it sound like there was some real arm twisting going on to get Ms. Foster to come on board the Comprehensive Sex Ed train, but we know she was groomed to promote Planned Parenthood from the start.  Again it must be asked, if Ms. Foxx and the other kids request a beer with lunch because they found information about it on Google, will TUSD provide it?  How exactly do we know when the adults on the school board will kowtow to the non-taxpaying members of the community to the detriment of those they are entrusted to protect?

Why are Deja Foxx and the other youth so caught up in Planned Parenthood and its role in government?  How did this happen?  They won’t like this, but it’s necessary we remember how the Nazis took over and used propaganda, education, and media, while simultaneously eliminating any spec of religion. While reading this link, replace the word Nazi with Planned Parenthood.  Replace the words Nazi Teachers’ Association with Teachers Union.  Notice the subjects that were changed–history and biology.  The same is occurring today; if you haven’t taken a look at your child’s textbooks, it’s time you do.  Back then teachers were expected to attack the lifestyle of Jews, now the teachers are expected to be intolerant towards Christians and Jews.  Think about the parallels.  And before anyone who feels offended states “Yes, but the Nazis killed Jews, Planned Parenthood doesn’t kill”……woops, that argument won’t work.

Let’s take a look at Ms. Foxx’s twitter feed to get an idea of her interests so we know a little about Kristel Foster’s appointment.  What exactly is she doing in this tweet?

Appreciation tweet to Deja ? I love you & I'm so glad we got so close?✨ @my_darling_deja pic.twitter.com/v0o0x6fVtr

And how about this tweet which promotes a youth power summit brought to you by, you guessed it, Planned Parenthood:

Here’s the invite in case you want to sign up, there’s still time in Arizona.  An here’s a description from Planned Parenthood’s Youth Power Summit Facebook page so you know what you’re missing if you are over 30 and don’t qualify to attend: 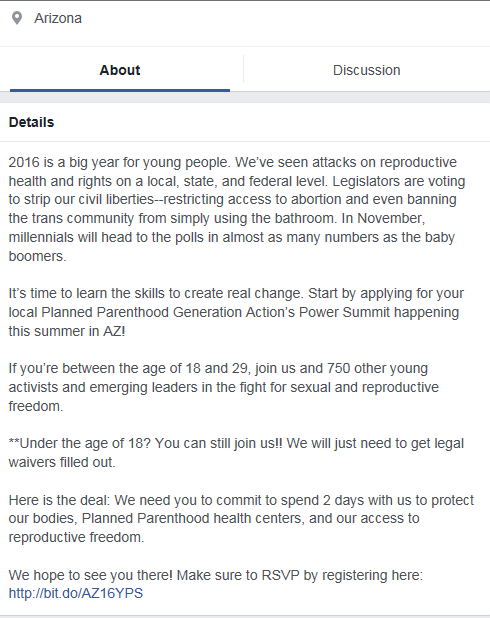 Where will we as a society land while we look away and fall for the Planned Parenthood/Teachers Union/School Board propaganda?  We still have the freedom to pull our children out of the corrupt indoctrination centers we call public schools, but who knows how long we will have that opportunity?  Our number one career is our children, homeschool them if you can.  Once we lose this upcoming generation, and based on Ms. Foxx and Friends, we may have already, our society and country will fall apart.

2 Responses to Planned Parenthood Follows Lead of Nazi Indoctrination Through Education, Will Tucson Say NO?

Leave a Reply to Amber Click here to cancel reply.