They stop at nothing.  Even people who didn’t know much about Planned Parenthood are questioning the “non-profit” now that the Center for Medical Progress videos have surfaced.  And previous Planned Parenthood directors like Abby Johnson have hit the media circuit explaining to anyone who will listen about the organization’s real abortion numbers and climate inside Planned Parenthood.  The state of Louisiana passed a law barring Planned Parenthood from any association with the state’s sex ed programs.  New and improved ultrasound machines prove to young women that their clump of cells is an active baby.

Planned Parenthood should be congratulated for the valiant fight they are putting up to save their corrupt and culture-rotting organization.  As America wises up, Planned Parenthood pushes back harder.  It’s great seeing them spend a boatload of money to advertise during Fox News programs; possibly the one network with the most pro-life viewers.  Good, that much less money is available for Planned Parenthood to spend on abortions and sex ed.

So, what to do?  How about Planned Parenthood in a school building itself?  Great idea–circumvent Mom and Dad, play on childrens’ emotions, and laugh all the way to the bank.  This clinic will become reality  if the Reading, Pennsylvania School Board approves it.

Even the Reading Eagle reporter is hiding what Planned Parenthood really is by labeling them as “health-related”.

Most parents reading the headline wouldn’t be alarmed because Planned Parenthood is not mentioned until the third paragraph, far enough past the point where most will read.

Now we need all hands on deck.  Anyone who has contacts in the Reading area, please alert them that the vote was delayed until June 28th.  Manny Guzman, one of Reading’s Board of Directors, is really pushing for the in-house Planned Parenthood center.  In fact, he really was disappointed the vote was delayed–it sort of reminds us of Tempe’s David Schapira several years ago when his Planned Parenthood dream was delayed in Tempe Union High Schools (TUHSD).

Come on, Mr. Guzman.  School is out for the summer, this delay is not a disservice to anyone except Planned Parenthood and politicians who will benefit from it.  Furthermore, look at the extra time given to the program organizers on June 21st.  This is the same tactic used in TUHSD.  Originally, Planned Parenthood was given 90 minutes to present its curriculums, public comment (taxpayers) were given 3 minutes. 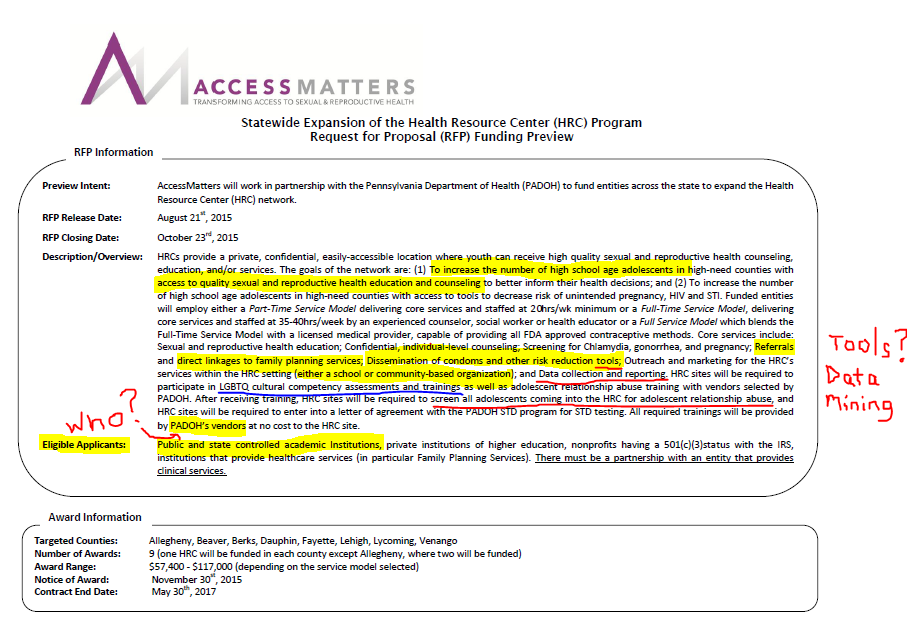 The above request is troubling on so many levels.  What exactly are the other “tools” to be disseminated?  Could they be IUDs, birth control pills, RU486, abortion referrals?  Why the mandated LGBTQ screening?  Notice the data collection.  Pennsylvania will now have very personal information on its citizens’ children.  Who will monitor what is recorded?  Who are Pennsylvania’s vendors AccessMatters will be referring?   Are parents being told what is really behind this expansion into government and state-controlled schools?  Parents can opt their children out of condom distribution, why isn’t this entire program an opt-IN at the least?  The answer is simple, it’s another attempt by the sex industry lobby, led by Planned Parenthood, to take parents and family out of the child’s life.

AccessMatters is  a big business, masquerading as a non-profit.  The next time someone complains about teachers’ salaries, share this AccessMatters 990 from 2013 with them.  Ask them how these salaries are justified: 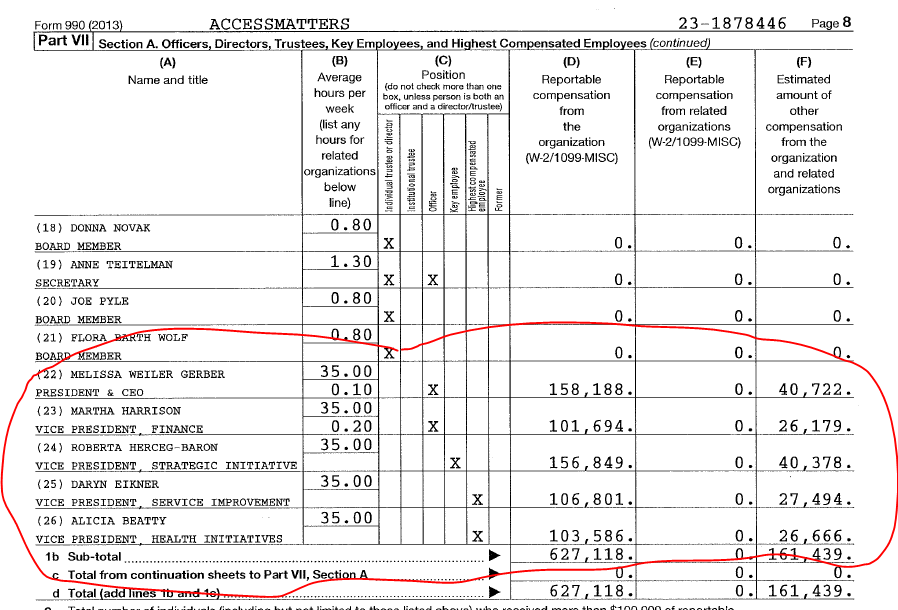 In addition, remember we are constantly told those big, bad corporations and some politicians don’t pay their fair share of taxes?  Neither does AccessMatters.  They get to keep more than the rest of us so they can use the spare cash to open school-based sex clinics.

There is no doubt AccessMatters is an arm of the Pennsylvania government to collect data on the children.  What better place to find a plethora of kids without parents around?  An in-school sex ed clinic is proving too good to be true.

The 2013 AccessMatters tax documents contain pages of organizations to which they sent money.  Here are the Planned Parenthoods listed.  Planned Parenthood Keystone, which Reading Schools will partner with, has had a financial relationship for years it appears–the Reading school-based opportunity is not new. 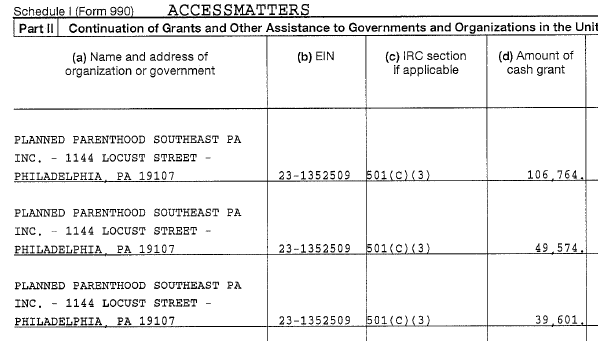 Here is the worst news.  Reading High School is hardly the first in the state to have a school-based clinic.

It is imperative the Reading School Board hears from taxpayers, not just in Pennsylvania but all over the country. Here is the contact information for Reading Schools Board of Directors.  It is easy to shoot them a polite email.  Planned Parenthood needs to be stopped in its tracks before they open up in your local high school (or middle school).

Americans–>Stand up for Your Religious Views Before Canadian Policies Arrive
Two Rallies in Reading, Pennsylvania to Stop a Planned Parenthood Clinic INSIDE the High School