Because Phoenix Union High Schools (PUHSD) was not up front with us when we requested to review their sex ed curriculum, we chose to obtain information through Freedom of Information requests.  After a three month plus wait, we received a whopping (not really) 16 pages of emails dated June 2014-November of 2014.  The request was for any interaction with Planned Parenthood from January 2013 through October of 2017, almost five years.  Well, at least we got some information.

It is not coincindental that Phoenix Union was contacting Planned Parenthood for direction for sex ed at the same time Tempe Union High Schools’ parents were waging a battle against Abortion, Inc. in their schools.  Laws had been passed in Arizona to protect kids and pro-family values, which are the vital cell of any society.  Planned Parenthood was not going to go away with its tail between its legs.  They knew parents rarely watch what is going on in schools, and Phoenix Union was a perfect catch for them.  Planned Parenthood preys on minorities and low income families, and PUHSD has many of both.

In June of 2014, North High School’s Valarie Garcia contacted Planned Parenthood to request a speaker for sex ed in her summer school class. 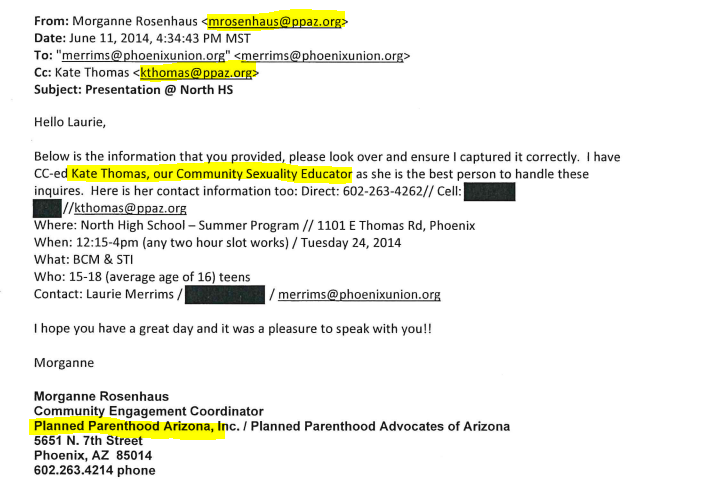 While this may sound benign to some parents, keep in mind these programs are taking time from already busy school days.  We have to ask ourselves why precious time in addition to Phoenix Union resources are being used to incorporate Planned Parenthood into the school day.  In a subsequent post we share some information about this which we learned from Tempe Union High School District.  There is a lot of district time being used for sex ed.

To our readers who are new to this subject, Arizona has laws on the books to protect children and families, while our Arizona legislature works hard at the beginning of each year to keep these laws on the books.  One of them is SB1009 from 2012.  It is simple, Arizona’s public and charter schools must teach pro-life and adoption as preferred over abortion.  Following the bouncing ball, that pretty much eliminates Planned Parenthood from the conversation when looking for a sex ed curriculum since the taxpayer-funded organization makes most of its money from abortions.  Where were lawmakers in Phoenix Union’s territory when this presentation in 2014 was occurring?

Ms. Garcia was so excited about Planned Parenthood’s sharing of birth control methods, she didn’t remind Planned Parenthood not to discuss the IUD, which ends the life of a human.  There also does not appear to be any communication reminding Planned Parenthood to omit abortion from their list of services discussed.  It is good Ms. Garcia shares the district requirement for permission slips to attend sex ed.  Actually, that is also state law….Arizona is an opt-in state for sex ed, not opt-out. 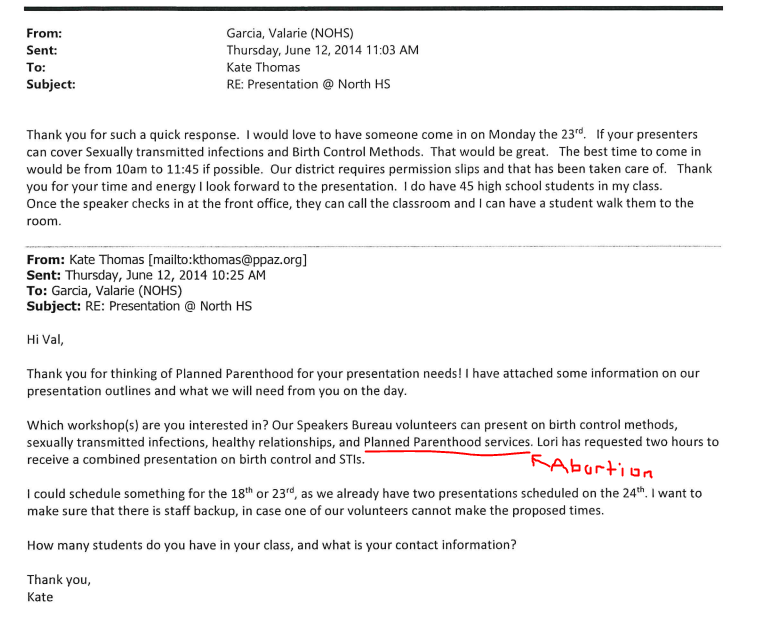 This is the crux of the guidelines set forth by Phoenix Union: 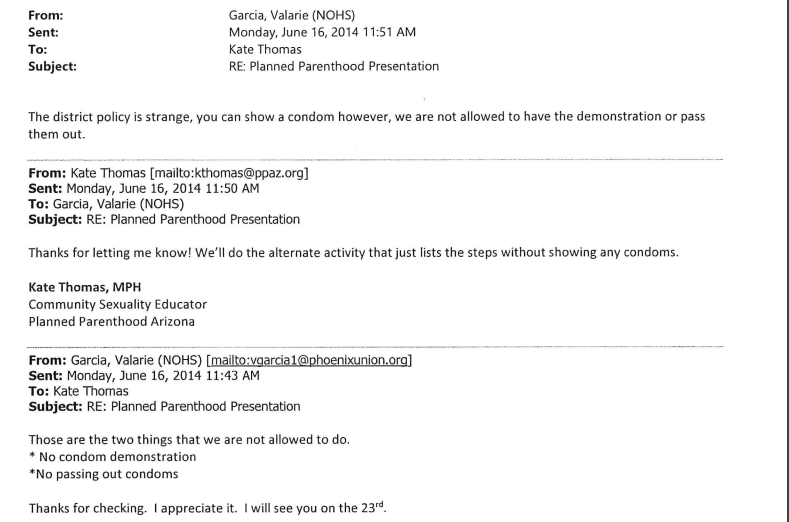 How many districts in Arizona and across the country are sending emails to Planned Parenthood such as these?  It is evident Abortion, Inc. is ready for them with staff members and curriculum ready to go.  We hear much in the news about the “nanny state.”  It seems that Phoenix Union is the “nanny school district.”