We have been following the ridiculous directives from the Canadian government regarding what should be taught as sex education in schools and when it should be taught.  The situation continues to decline, even as more comes to light.

Ontario Premier Kathleen Wynne pushed a radical Planned Parenthood-endorsed curriculum in her schools despite pushback from parents.  Now the bad news has moved to Quebec.  While most people spend the month of December preparing for Christmas and Hanukkah, a lucky group of educators in Quebec got to spend this December preparing to teach five-year olds about sex.

Sex ed does not belong in kindergarten or in any child’s classroom, but this program is mandatory–no exceptions.  Look how crafty the Canadians are:

Hmmm….didn’t Superintendent Kenneth Baca from Tempe Union use similar wording about incorporating Diversity and Inclusion into everyday life in the schools?  These Educrats all drink from the same trough evidently.  While they appear to be creative, they simply regurgitate the same talking points endlessly, while the culture in their schools decline.

And what does sex ed have to do with French lessons?

Notice in the following bio for a sex teacher (seriously, is that what she wanted to be when she grew up or is the money to good to pass up?), Planned Parenthood of Montreal changed its name to The Sexual Health Network of Quebec (SHNQ).  Planned Parenthood masquerades in the United States, why not in Canada? 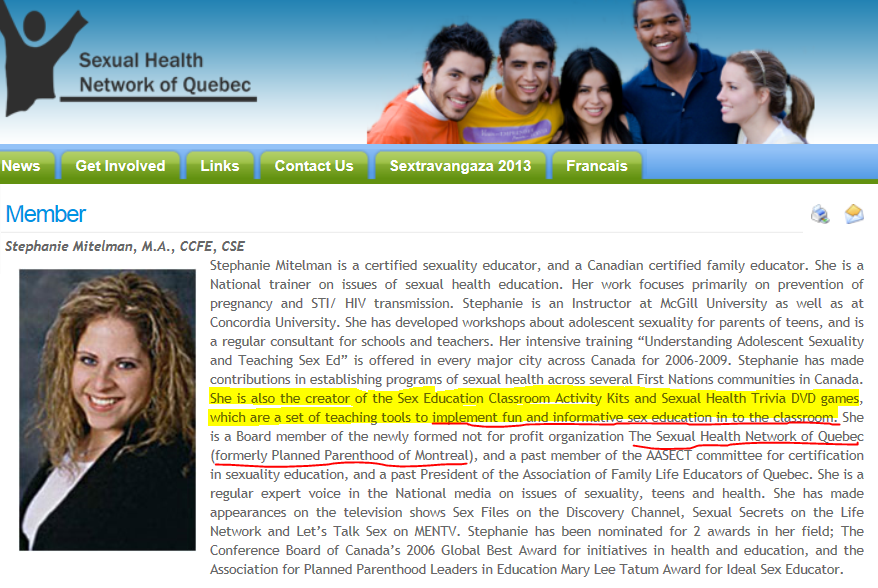 Ms. Mitelman seems like a nice lady, until we perused her website.  If you want to see what goes through her mind and the minds of The Sexual Health Network of Quebec (Planned Parenthood), click here.  Here’s the name of one of their fundraisers, and the link if you can stomach it:

Don’t let your kids watch it. These people are teaching your kids, Canada, the fundraiser is to support Sex Ed!

As of this writing, Ms. Mitelman has gotten a promotion.  She’s now Treasurer of The Sexual Health Network of Quebec!  More money for her to count!  Click here for the Board of Directors and read each of the bios.  Lots of Planned Parenthood, trans, reassignment, etc.  Canadian families should not be surprised about the new curriculum in their schools, this has been brewing for awhile.

Check out the Vice-President of SHNQ.  How is this organization allowed to be near kids?https://www.notinourschools.net/

Americans should be concerned as Planned Parenthood and the Democratic Party wages its war on kids in the classroom.  If this type of thing isn’t in your child’s school yet, it is coming unless you get involved.

Canadians, contact Peace Ontario to get involved at 905-869-6334 or info@peaceontario.com.