However, in the last few days Planned Parenthood’s façade is cracking even more.  Today Live Action released a video exposing PP’s employees, in their own words, telling women they don’t offer prenatal care.  Instead they provide abortions.  What?  How does that fit the 3% abortion rate they tout?

'Tis the season! All I want for Christmas is this IUD ornament! Check it out: https://t.co/ZfREuRPjM0 pic.twitter.com/f3YZAGU4xe

Remember when we wrote about transgender medical care coming to a Planned Parenthood near you?  Those in the Phoenix area, hold on to your hats, it’s coming: 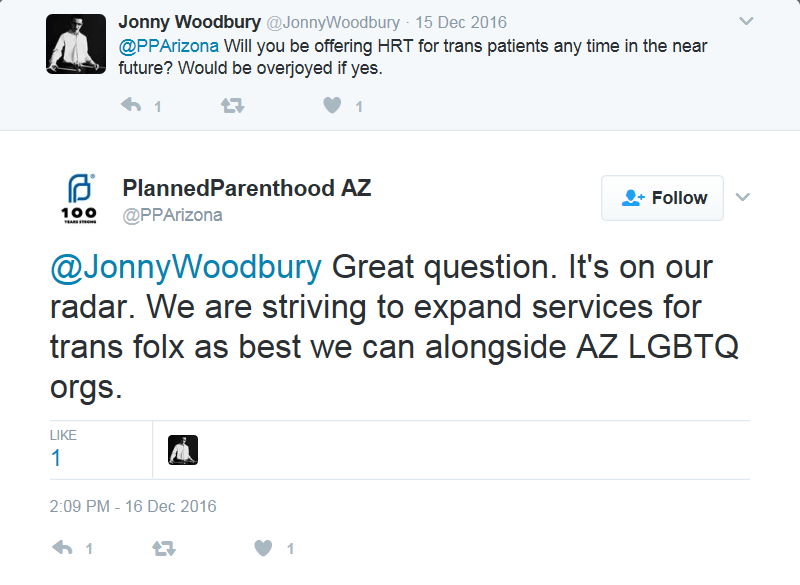 By adding transgender studies to health class via sex ed, Planned Parenthood creates a problem and then normalizes it.  This leads to more customers through its doors.  Adding transgender services will also skew the percentage of abortion visits downward so they look more appealing to the general public.

The birth control pill has many benefits beyond pregnancy prevention, including decreasing #cancer risk! More: https://t.co/FROzEtp9Lq

Here’s an interesting article on Planned Parenthood Arizona’s blog.  Note the date is December 19th and they ran it several times on Twitter right before Christmas and Hanukkah, when people might be feeling a little religious and spending time with family.  They wouldn’t want a woman’s family influencing them, would they?

What do different religions say about #abortion? You might be surprised: https://t.co/0h0H5qTN4b #reprojustice

Basically this blog implies the reader can pick the religion they want that makes them feel okay about their abortion.  But there is one obstacle:

If Planned Parenthood read the Catholic Church’s voter guide, they would share with readers there are a few non-negotiables when voting, and one of them is protection of life from conception until natural death.  Not only is Planned Parenthood not medically accurate, they are also not religiously accurate.

@ppazaction was out in full force. Stay tuned for opportunities in the future to continue fighting to protect reproductive care and rights! https://t.co/ENvMgnXTmu

We won’t regurgitate the vulgar words, clothes, and behavior by some of the participants at the marches on Saturday.  They made their mark in news reports.  We will remind them there are children watching.  It’s time those partnering with Planned Parenthood, whether in the marches, on social media, or financially, find it within themselves to grow up, for the children.

Finally, one might say Planned Parenthood is the gift that keeps on giving.  It’s a piece of cake to document Planned Parenthood’s dangers and deceptions, especially after these last few days.  It’s more important than ever to share with voters the goings-on with Planned Parenthood and their supporters.  Check out this Twitter page in support of the Women’s March and ask yourself if this is who you want with your kids.  Do her values match yours as a parent?

Here’s a little more about the above marcher.  Arizonans, especially those proudly sending their kids to Arizona State University’s Honors College, may want to look into what their hard-earned money is paying for.

We will do our best to keep our readers up to speed on the open-minded, loving people at Planned Parenthood……Until we are blocked.

2 Responses to If Planned Parenthood is in Your Schools, So Are the Following: