Berdetta Hodge is running a positive campaign to gain a seat on Tempe Union High School’s governing board while avoiding any controversial issues on her campaign website.  This is appealing to many voters.  However, she is one of Planned Parenthood’s supporters and will be a key pro- sex ed vote if she is successful in November’s election.   Moses Sanchez, the only TUHSD board member who voted against Planned Parenthood in Tempe high schools is not seeking reelection.

Ms. Hodge is a member of Arizona List, an organization that supports pro-abortion Democrat women for office in Arizona.  We are waiting for a registered Democrat to think outside the box, review the facts, and oppose abortion and Comprehensive Sex Ed.  In the meantime, Arizona List describes Ms. Hodge like your favorite neighbor. 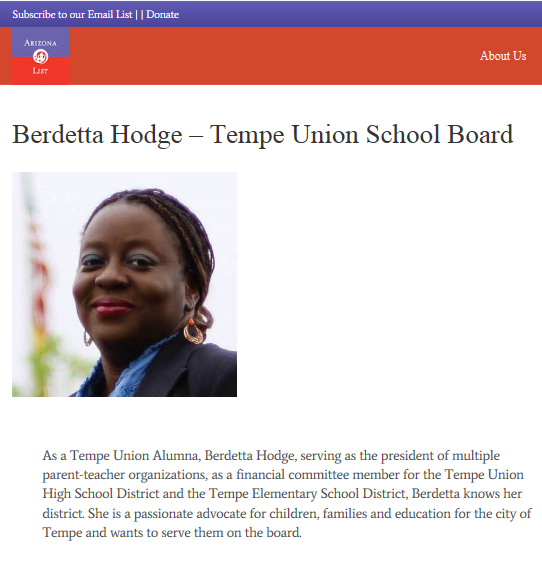 In the usual irony, Arizona List uses all the overused talking points–“advocate for children, families, and education”.  They fail to note she advocates for children only after they are born and she supports abortion and comprehensive sex ed which actually destroys families.

Ms. Hodge is also being used as a token minority for Planned Parenthood.  As we have discussed, Margaret Sanger, Planned Parenthood’s founder,  pushed for abortion of minorities to achieve “racial purification.”

Ms. Hodge has every right to support Planned Parenthood.  But if her website is vague and her supportive statements are contradictory, what is she really bringing to Tempe Union High Schools?  Could it be this, minus the “medically accurate” part: