Even though it’s an off-year for elections, there is no time to relax. “Non-profit” Planned Parenthood is in a desperate mode as they ponder what they will do without the $1.3 million/day they receive from our paychecks. At the same time, 4-d ultrasounds leave no doubt in a young mother’s mind as to whether she is carrying a blob of cells or a baby.  The best way for Cecile Richards and crew to fight the truth is to warp young minds, and the younger the better.  The best place to find large populations of kids is in school, so Planned Parenthood continues to strategize who will carry their water in future elections.

In Chandler, Arizona, Mr. Steve Weichert recently ran for state senator of his Legislative District 17.  Fortunately for the children of Arizona, he was unsuccessful.  It appears he will be running again in 2018.  Last year Mr. Weichert ran as a Clean Elections Candidate in Arizona, so fundraising is limited by law.  Therefore, we won’t find the usual Planned Parenthood campaign contributions we expect to see for their Democratic candidates.

Planned Parenthood keeps no secrets.  It’s easy to see who they support in Arizona’s LD 17.  As we have noted before, Planned Parenthood’s candidate Q and A’s are predictable and repetitive because they really only care about one thing–getting young girls dependent on the organization so they will seek out abortions when the time comes.

And then there is Twitter.  Recently, Mr. Weichert was engaged in some back and forth regarding school choice which led into a conversation about Planned Parenthood. Knowing Planned Parenthood supports him, other twitter users mentioned he would likely promote comprehensive sex ed in schools for Planned Parenthood if elected.  He tried to shy away from any connection, other than just plain liking the organization.  Obviously there is a relationship:

As the twitter conversation ensued, Mr. Weichert tried to be evasive: 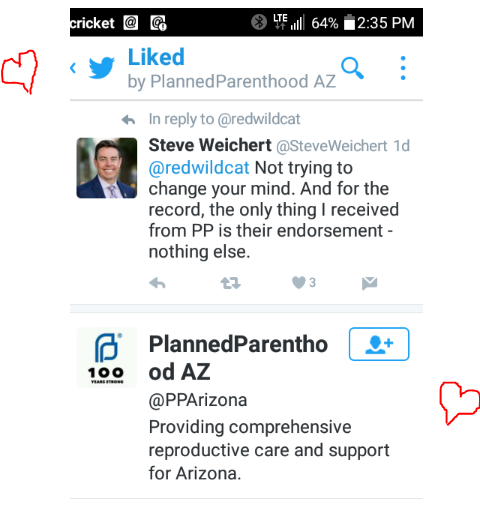 Wait, there is more.  Not only will Steve Weichert support bills which prop up Planned Parenthood, he misleads readers in that same interview.  He states he approves families opting out of sex education in schools; he doesn’t seem to know Arizona law.

In Arizona, sex ed is OPT-IN only.  Planned Parenthood doesn’t want families to know this.  While they are forced to follow the law, using the words ‘opt-out” implies it’s normal to teach sex ed in school and puts the onus on the parents to defend why they don’t want their children to participate.  Opt out language also provides an opening to sneak sex ed into subjects other than health class.  Imagine if schools really followed Arizona law and got permission from parents for all materials–literature, art, and science books– that teach sex ed in some form. 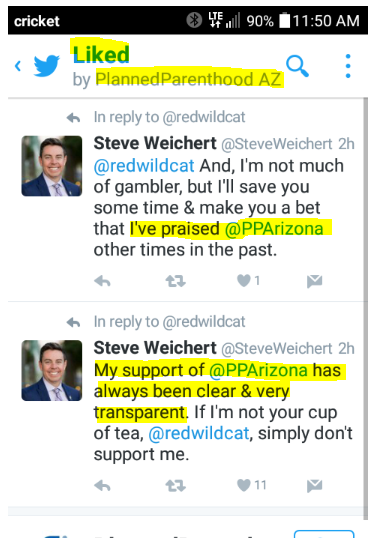 While we wait for the 2018 campaigns to start, we can rest assured that Planned Parenthood of Arizona and Steve Weichert are a couple.  The bottom line is pro-life Arizona Democrats cannot get access to the voter base in the state because they aren’t supporting Planned Parenthood and abortion.  That data base may be Weichert’s biggest prize for his next campaign.