Creighton School District parents were loosely notified of the plan to thrust Planned Parenthood on their children, and it appears teachers haven’t been asked if they are comfortable presenting material for the nation’s largest abortion provider.

It seems Creighton district officials don’t know they are part of an ongoing saga in Progressive education.  Recently, Planned Parenthood and Creighton organized an open house to share their comprehensive sex ed plans with parents.  Unfortunately, not all parents were notified and others weren’t notified in a timely manner to make plans to attend.  Oh come on, you don’t think that was purposeful, do you?  😉

Sylvia Earl, the district’s special projects director ran the “open house”.  Planned Parenthood has her well-trained on all the talking points.  She didn’t seem bothered when asked about the abortion giant selling baby parts. The special task that Planned Parenthood has left to Ms. Earl–>hook those little ones on sex so they can establish a relationship with PP and become a life-long customer.

Creighton has chosen to use “All About Life“, one of the Siecus-approved comprehensive sex ed curriculums. Notinourschools.net has obtained a copy of the sex ed materials being presented to students in second grade and up, with plans next year of starting sex ed in kindergarten. Yes, kindergarten. In this video describing Comprehensive Sex Education, “All About Life” is one of the examples discussed.  Good job Creighton Schools…..way to keep up with Tempe Union and Tucson Sunnyside!

Any district that signs on to teach anything produced by Planned Parenthood or approved by Siecus is a perverted school district.  This quote is from page 27 in the “All About Life” K-3 curriculum handbook: 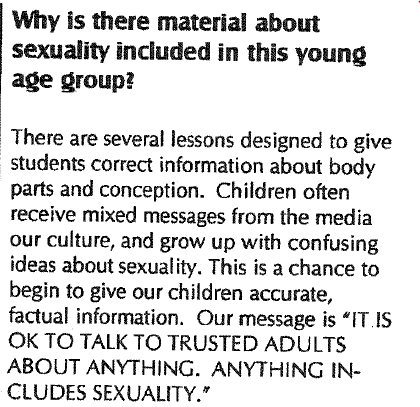 Is it any wonder children have received mixed messages from the media and culture?  Or maybe the mixed messages are from Planned Parenthood itself.  What’s not confusing about this tweet:

A period app that isn't filled with flowers or assumes your gender? Welcome @PPFA's Spot On for your sexual health. https://t.co/YE8L16VOYR

As for “trusted adults”….the seed is planted in kindergarten for Planned Parenthood to be those trusted adults instead of parents.

Planned Parenthood has hijacked education in the United States.  Here are common goals for 5-6 year olds entering school.  How long until those with PhDs and Masters degrees in education tell us sex ed should be inserted into the list of kindergarten goals?  They will get away with it unless enough adults decide to take back their parental responsibilities.

One Doctor in Tucson has More Influence in TUHSD than the District’s Taxpayers
Too Graphic for Your Kids to Watch at Home–No Worries, They’ll Catch the Material in School