In Genetics class one of the basic lessons is the chromosomal make-up of a baby.  XX–>you got a girl, and XY–>it’s a boy.  It’s very simple and very, very rarely is there an abnormality in this equation.

When an agenda is pushed, the best avenue for success is to change definitions and facts, say it enough, and the general public will eventually believe it.

While it appears we are suddenly inundated with everything “trans”, gender-neutral, inclusive, pretend marriage by those of the same sex, etc., this has really been developing for quite some time.

Like the tangled web of Planned Parenthood, the gay, same-sex, GLSEN, anything goes agenda runs deep and in places we don’t expect.  Just a quick glance at the GLSEN website today showed its partnership with many mainstream companies, and a few of my favorites–Target, Kelloggs and McDonald’s.  McDonald’s!  That was my first job and a management opportunity later in my life.  The atmosphere was to always be family oriented and kid-friendly.  So what happened?

We were busy.  We were raising kids, running businesses, paying bills, going to church, mowing the lawn, and in between we didn’t want to criticize those who felt marginalized for whatever reason.  After all, the media and Hollywood constantly criticize Bible-toting, right wing, pro-lifers as intolerant and close-minded, even if we didn’t read the Bible, own a gun, or worry about abortion.  So we smiled and minded our own business.

We will not go into all the details on this site of the monster the UN has created with complicit governments and corporations who succumbed to pressure.  Visit familywatchinternational.org and read the book Stand for the Family by Sharon Slater.  Sharon is one of us.  She was busy raising her kids in suburbia when something caught her eye.  Now her eyes are on the UN, and those at the top don’t like it.

For our sake we will talk about a few situations to be aware of at your children’s schools.

We know teachers unions control education,  parents don’t.  Here’s a sample of the grants and awards the Arizona Education Association is handing out.  Note the diversity and gay-straight ENCOURAGEMENT application, among others.  The gay-straight application is looking for students at risk.  Did it ever occur to them it is the religious student who is at risk in a public school?

Update 8-3-15:  Shortly after the above attachments appeared on Twitter last night, the links disappeared from the internet.  Was the Arizona Education Association behind this?  Is it trying to control what we know?  Does exposing the gay and diversity agenda, financed by the “poor” teachers, take the focus away from the teachers’ union narrative that taxes need to be raised for “education”?

We were able to find some references to a few of the awards the AEA is trying to hide: 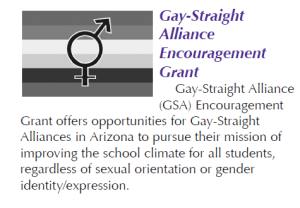 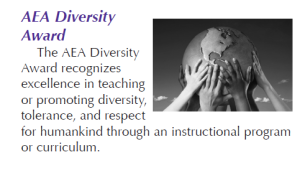 Back to GLSEN, if they show up at your child’s school, beware.  They will use bullying as an avenue to enter.  Once they are in, the kids will be influenced and you won’t be there to guide your child in your beliefs.

One reason Planned Parenthood hooks up with organizations which promote alternative sexual lifestyles is they all can support each other with an “anything goes” attitude.  Check out this Facebook page from the Cincinnati area.  For those of you unfamiliar with southwest Ohio, Cincinnati is a traditional, family and community-focused city.  Well, not if Planned Parenthood has anything to do with it.

Remember Kevin Jennings, Obama’s education czar?  You thought “czar” was the problem word in that question, right?  Make sure to read his link.  He is powerful and his influence in schools is dangerous, especially with Obama at his side.

It’s okay to question the principal, administration, and the school boards.  They won’t like it because they think they are smarter than you and they are receiving money directly or indirectly from these organizations.  Let us know if you get resistance.  Tell a neighbor.  Tell another parent.  Work together.