The general public is being fed a narrative that the country, especially school-age children, are just not tolerant enough.  We are told Whites are racist and Believers are homophobic.  We are told the bullying towards the multitudes of LGBTQXYZ students in schools is unprecedented and needs to be addressed, right now.

Yet we elected an African-American President twice.  African-American, Hispanic, and those of Middle Eastern heritage are being elected to public office across the country.  Gays are also being elected to office–we know this because the media reminds us at every opportunity.  Many of these new officeholders would not have won if not for those racist White Believers.  Church-going Christians are reminded every Sunday and at every Bible study about loving their neighbor, praying for others, and helping the less fortunate.  Yet they are labeled as haters, just for presenting Biblical and scientific facts in the public square.  Finally, the media is extremely supportive of the LGBTQ community so if there are numerous bullying issues occurring in schools, shame on them for not reporting it.  This begs the question, is there really bullying directed at LGBTQ kids in schools or is it a manufactured crisis for a power grab?

It didn’t take long for some information to come to light about the charade being performed by Cave Creek Unified School District.  The Governing Board had a meeting on March 11, 2019 and the new, less than medically accurate, sex ed curriculum was discussed. Scroll to the 1:08 mark and listen to public comment by Nadia Mustafa in full support of the district’s agenda.

Ms. Mustafa introduced herself as a Cave Creek parent.  What Ms. Mustafa failed to tell the governing board and parents in the audience is she is doing work for the City of Scottsdale as Chair of the Scottsdale Human Relations Committee.

Ironically, Monday night, April 8th, Ms. Mustafa will be overseeing a commission meeting and they will discuss a local Gay Pride Parade. 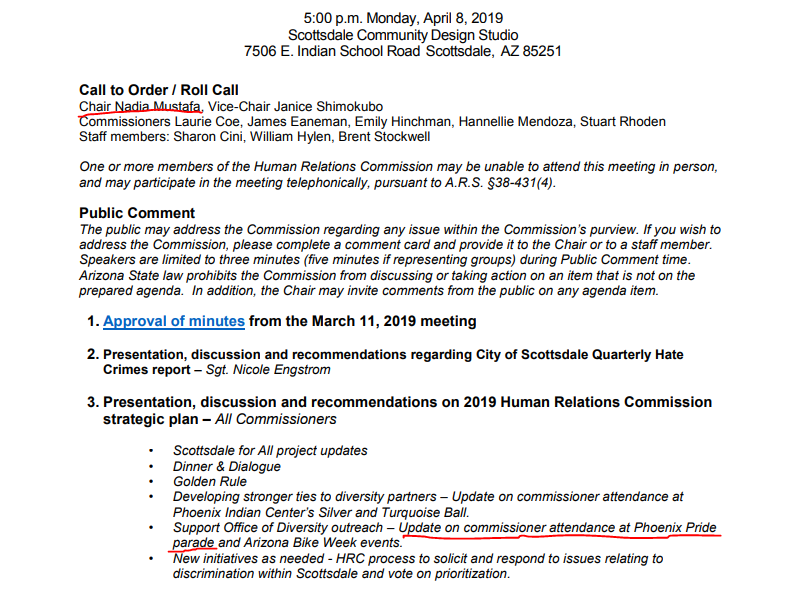 She’s been busy in the past, also.  Click here.  And click here to see Ms. Mustafa using her position in Scottsdale to change history, much like she supports changing science.

Somehow Ms. Mustafa has the ear of Cave Creek’s superintendent, Dr. Debbi Burdick.  Taxpayers contacted the Governing Board and more than once she is answering for the board members.  She told one concerned parent she has to respond due to open meeting laws.  That is not true.  Each board member can respond to an email without copying the other board members and no open meeting laws are violated.  Why is Dr. Burdick controlling the narrative?  Why isn’t she allowing her bosses who are the governing board members, to respond?  If the Cave Creek Governing Board is restricted due to unique open meeting laws in their own district, why does each member have an email address?

It gets better.  When Dr. Burdick responded to a parent’s email, she told the parent to not forward the email to the public body.  Why is Dr. Burdick censoring community members?

There is nothing but a huge power grab occurring at Cave Creek Unified School District.  Vocabulary, thoughts, religion, and access to scientific facts will be controlled in the classroom.  Dialogue between Governing Board members and the community will be censored, even though the Board is voted in by the community.

Please attend the Cave Creek School Board meeting and encourage the Board members to VOTE NO on this restrictive and misleading sex ed curriculum:

Be there or be censored!