One by one, conventional, time-honored organizations are falling prey to the unwritten rule they must accommodate everything except long-standing values.  We have documented the decline of Girls Scouts as they embrace Planned Parenthood.  At least parents of boys still had an extra-curricular option, but no more.

Recently Boy Scouts announced they will be accepting transgender children into their troops.  Up to this point, young boys were encouraged to be boys and grow up to be men.  Over the last several years, men have been demonized on television while organizations like GLSEN have received big dollars to perpetuate the myth that a person can change his or her gender.  This fabricated “problem” has peppered schools, churches, Hollywood, and now Boy Scouts of America.  It’s a convenient situation that drives political campaign contributions and employs people at “non-profits” for large sums of money, all the while ordering government and private businesses to create extra layers of personnel to deal with related man-made issues.

When an attorney presents DNA evidence in a trial, the jury often makes a decision based on this scientific evidence.  When someone dies under curious circumstances, a coroner studies the body, runs lab tests, and comes to a scientific conclusion about the time and manner of death.  Why then is a child’s DNA irrelevant to his or her gender?  The facts can’t change, the genetics is final.  Until certain “non-profits” take over.

All children go through phases of feeling left out or insecure about a variety of issues.  Because the LGBTQXYZ movement has secured itself as commonplace with the help of school districts, teachers unions, and politicians, young kids are exposed to sexual issues everywhere they may not be ready for.  This constant talk and exposure makes a child numb to the truth that a person’s gender can’t be changed, just like the DNA evidence in a courtroom can’t be changed.   Then when the kids aren’t feeling good about themselves, GLSEN, PFLAG, and Planned Parenthood jump in the void and pervert them.

But it’s not that simple.  Did someone get paid a lot of money to come up with this latest list of  almost 100 “genders”?  Does this mean the Boy Scouts focus is now sexual instead of providing activities which build character and citizenship?

Look at what the PFLAG organization is striving to access: 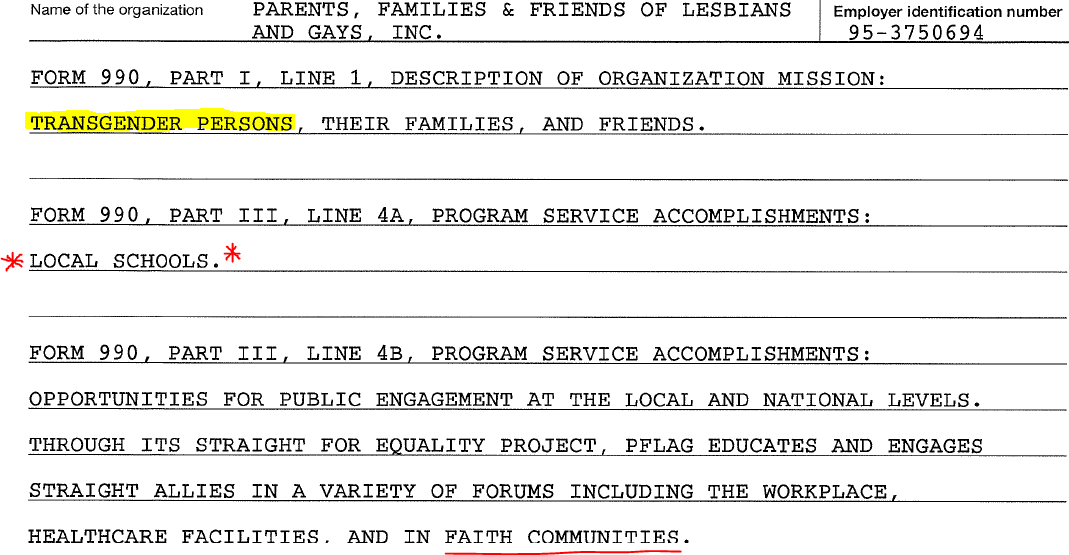 Boy Scouts of America denies there will be any change to their focus.  However, the organization was pressured by Scouts for Equality.  Study their website.  It will be difficult to find references to camping, self-preparedness, citizenship, and the American flag. Here is an interesting entry:

Religion is mentioned on their website, but more in ways to tolerate God than promote Him.  While Scouts for Equality on paper says they support the Boy Scouts’ mission, their website looks more like it was written by GLSEN. 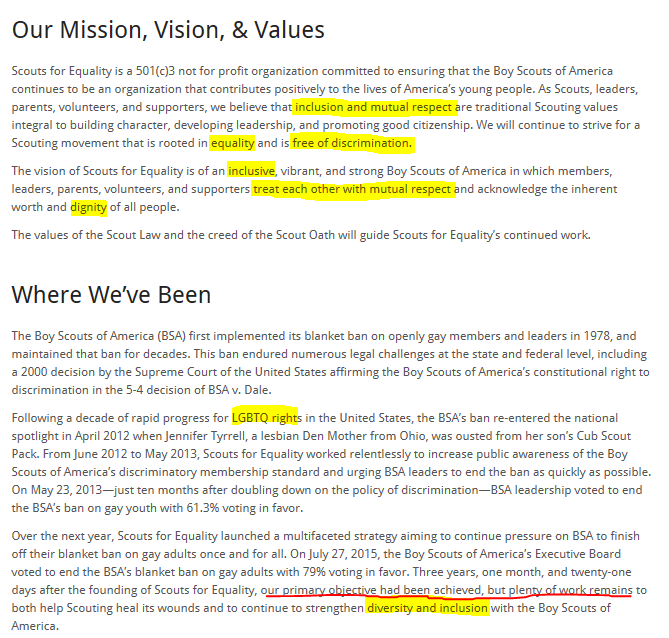 Here are some clips from GLSEN, Inc. June 30, 2016 financial statement:

Who are these “educators” and who is Training the Trainers?  Who has let them in our schools, whoever they are?  Have they had background checks by each school district?  Will these same people have access to Boy Scouts?  Look who is linked on the Scouts for Equality website: 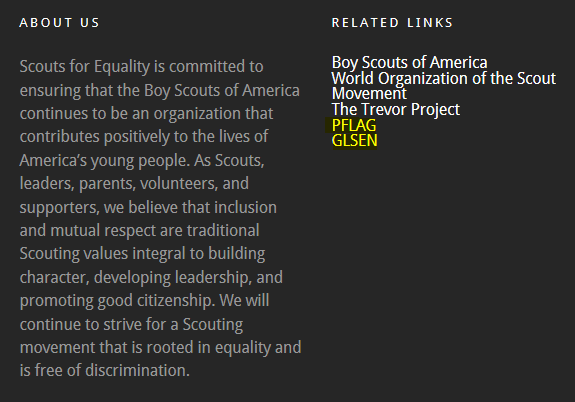 The Boy Scouts of America has indicated religious troops don’t have to worry, they will not be forced to accept transgender children.  That sounds nice, but religious organizations were taken for a ride not too long ago.   Remember Obamacare and the contraception/abortion mandate that was passed after the Catholic Church was assured they would not have to violate Church teaching?  Ask The Little Sisters of the Poor how that worked out for them, their legal issues are still unresolved.

Wouldn’t it be nice if religious families were given as much consideration in the public square as everyone else?