We have learned of some crazy decisions by various governments lately which undermine the children and family while simultaneously make no sense.  In April, a Pennsylvania school showed LBGTQ videos to students but forbid their parents from seeing those videos.  Just recently, Fairfax County Schools adopted a radical sex ed program which satisfies GLSEN rather than local parents.  You know, the folks who are overtaxed living just outside DC who have all the stakes in the game were ignored over bully GLSEN.  Look at what kids are exposed to when GLSEN gets a seat at the school table, this was a GLSEN retweet:

As Pride month comes to a close, Desmond Is Amazing, the ten-year-old drag kid from New York, is proof that the future is queer. 🌈 pic.twitter.com/TnZDwS4taT

Supposedly in Arizona, our laws keep this nonsense out of public and charter schools.  Children and their families are welcome to join GLSEN on their own time on their own property, but not on school time.  Arizona law prevents homosexuality to be taught as the norm.  And Arizona sex ed curriculum laws were passed to stress pro-life over abortion.  Phew, Arizona families can breathe easy.

Well, not really.  There doesn’t appear to be any teeth in these laws and Planned Parenthood and GLSEN are aware of it.  School district administrations and Boards often state they are following laws when they are questioned, but they aren’t questioned often enough.  Some parents have been asking who enforces these pro-family curriculum laws.  They have been bounced around between the Arizona Legislature and the Arizona State Board of Education.  It would not appear the Arizona Legislature should be the school police.  They exist to make policy, not enforce it.

An Arizona parent recently did some detective work and found some information which further confuses the situation. Arizona school districts are charged with following Arizona law.  However, on Arizona’s Secretary of State website, there is a link to the Arizona Administrative Code regarding Education.  On  page 16 of this code, sex ed curriculum and the guidelines to follow are listed.  Great, everything is in writing.  But who would think of jumping to the Arizona Secretary of State website to find the laws about public schools in Arizona?  Do school districts and their communities know about this confusing scenario?  There may be very good reasons for this but it further complicates the issue.

Page 16 of the Arizona Administrative Code is quite telling. 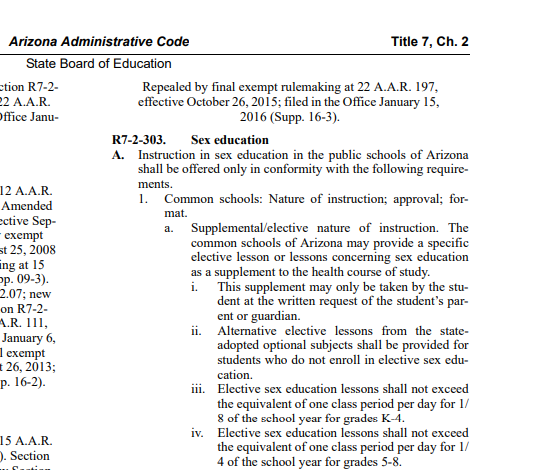 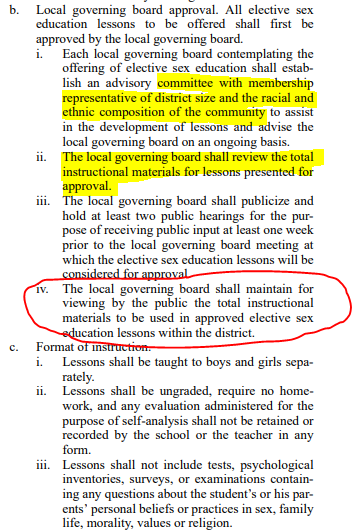 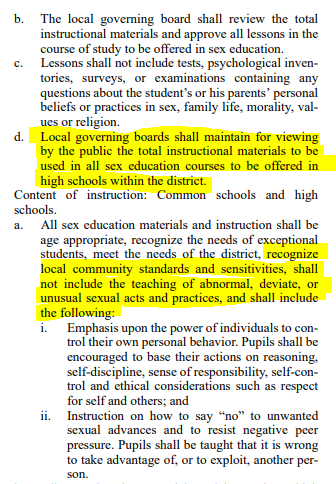 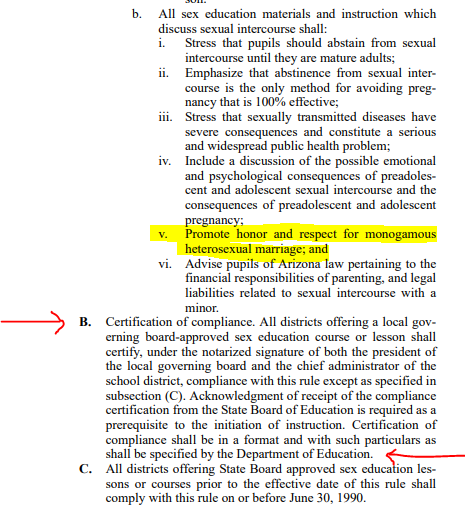 These codes are short and to the point, but from our research we conclude that many districts are indifferent to the codes, even if they are aware of them.   Sadly, one item the Arizona Legislature overlooked was a religious diversity mandate for school districts’ sex ed committees.  As usual, the legislators were politically correct in requiring racial and ethnic composition but religion is mysteriously ignored.  Imagine if Tempe Union High Schools (TUHSD) had been required to have a few LDS, Catholic, and Evangelicals on their committee in 2014.  The outcome may have been completely different.

Can we really trust that each school board member is completely reviewing ALL its sex ed materials, including links, videos, and supplemental material?  They commonly don’t even review text books as they rubber stamp everything that comes across their radar, especially if it involves spending money.

We know Phoenix Union High School District (PUHSD) is not complying with the above code.  The sex ed materials are to be available for public review.  Just last August, three members of PUHSD would not provide us with their sex ed materials to review.  When one of them finally grabbed a textbook for us to see, we were rushed out of the meeting room after only about 10 minutes.

The words “Promote honor and respect for monogamous heterosexual marriage” are a breath of fresh air.  The next time you review your child’s sex ed curriculum, see if marriage is even mentioned.  Most standard sex ed curriculums avoid marriage because it will be less likely their ultimate goal of getting the children to Planned Parenthood  for an abortion will be achieved.  IF marriage is in your child’s curriculum, thank the diligent parents who insisted on it.

Perhaps the biggest surprise from the education codes is the requirement school districts provide a certificate of compliance to the Arizona State Board of Education.  Who is enforcing this?  Are there Arizona school districts who have not provided this certification?  If so, is there a punishment?  How long do they have to comply if they aren’t already?  In which department is the certificate housed?  Is anyone from the ADE following up with the districts to verify what is recorded on the certificate provided is true?

Think about this, we have four government bodies involved in Arizona students’ sex ed curriculum.  First, we have the district itself.  Second, the federal Department of Health and Human Services coerces local schools to accept grant money for teaching kids about promiscuous sex.  We have heard Planned Parenthood complaining quite a bit lately about the fact they might lose a bit of government money due to some changes thanks to the Trump Administration (grab your violin).  Finally, the state of Arizona has both its Secretary of State Office and Department of Education involved in enforcement, but nothing is being enforced.

Surprise, surprise, big government is screwing things up. (But YOU better not be late renewing your vehicle emissions.)