One of the traits most frustrating about politicians is hypocrisy.  It is much easier for the voter if politicians are honest, even if we disagree with them.  Candidates should just give us a clear picture of their intentions so we can make solid decisions in the voting booth.

In Arizona, each January there is a mandatory Precinct Committeemen meeting where leadership for each county in the state is voted in, as are resolutions and bylaws.  It’s also a place where the elected office holders tell the PCs what a great job they are doing, even if they aren’t.  The meetings follow Roberts Rules of Order–it is serious business.

Recently it was discovered that a Republican activist and Precinct Committeeman donated to Democrat Sean Bowie’s campaign.   Mr. Joe Abate is a PC in Legislative District 24, he even has won awards.

Mr. Abate has been very active in Arizona politics.  He has had important positions in the Party and at the yearly Maricopa County organizational meetings.  In fact, Abate is going to be the Parliamentarian at the January, 2018 meeting. 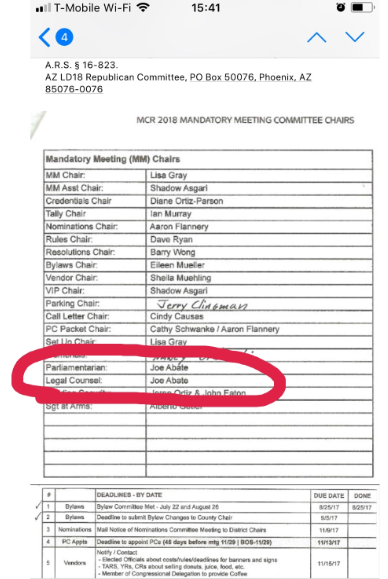 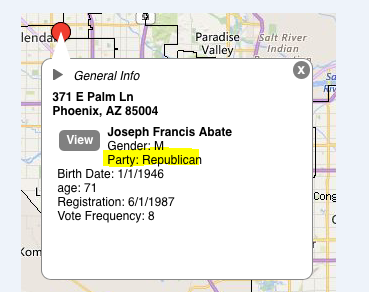 Mr. Abate is free to support any candidate he would like and none of us really know who our friends and acquaintances actually choose in the voting booth.  However, why would a Republican leader support a Planned Parenthood, “Make America Gay Again” candidate over Frank Schmuck, a former military officer who is pro-life?  It is unclear why the Arizona and Maricopa County Republican Party organizations are looking the other way on this.

UPDATE 10-9-17  Thanks to a sharp reader who sent us this picture.  It is Mr. Joe Abate receiving an award at the Maricopa County Republican Luncheon in May of 2017.  You know, the party that is pro-life and pro-family.  Devout Catholic and pro-life Congressman David Schweikert presented the award to Mr. Abate.  Looking on to the right is Chris Herring, Maricopa County Republican Chairman. 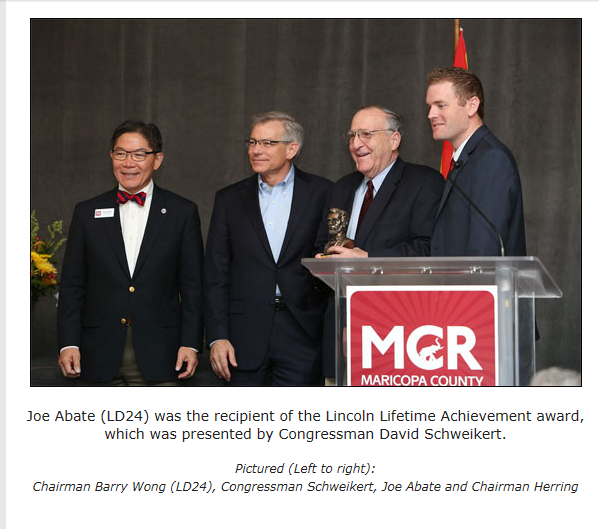 All of our questions as to why our Republican Congress is still supporting Planned Parenthood and handing them $1 million/day of our tax money may be answered by Joe Abate’s political activity.  The GOP supports Planned Parenthood secretly but complains about it publicly just enough so they can raise funds from pro-life voters who think they are following the Republican platform.  Republicans in Congress, please prove this theory is incorrect.