You may remember the regular medical updates given by the University of Arizona trauma team after the shooting in Tucson in January of 2011.  The surgical precision and difficult decisions they made certainly saved Representative Gabrielle Giffords’ life, and led towards a path of healing for the remaining patients who were transported to UAMC.  It is ironic that on one hand a physician can spend all his public moments saving lives, while he does the exact opposite off the clock.

Dr. Randy Friese was one of the talented doctors we saw on television regularly.  After things calmed down, he decided to run for office and he successfully earned a seat representing District 9 in Tucson.  It sounds refreshing to vote for a non-lawyer who is not a career politician.  But here we go again……a Democrat in Tucson.  They must all drink the same  Kool-Aid.

Guess who endorsed Dr. Friese?  Of course, sex ed is an issue for the good doctor.  Are we to think that as he is saving lives during trauma surgery he just can’t get the lack of sex ed for little kids in Arizona off his mind?  And did you know if you have a stable career it’s likely because you had sex ed in school?

If this statement is true, then why did we bother with “No Child Left Behind” and Common Core?  Dr. Friese’s statement, if it were true, would be a great reason to disband the US Department of Education.  Lots of tax money is spent when the solution is just so simple!

Or is Dr. Friese’s wife, Susan, behind his sex ed agenda? 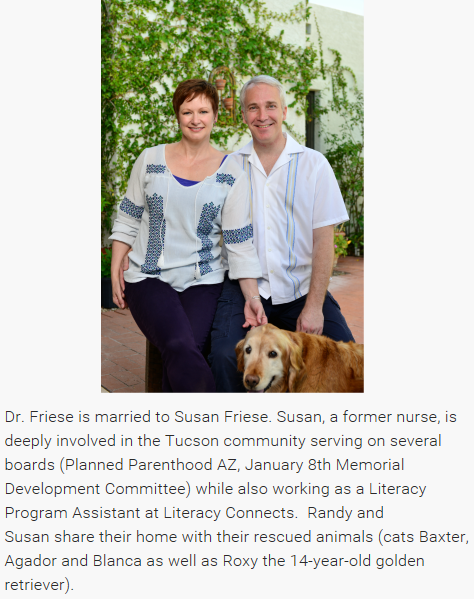 And look who is one of Dr. Friese’s donors, $3300 from Cheryl Cage to get the top doc in the legislature.  Ms. Cage isn’t just a friend of Friese’s, she is on the Board of Directors for Planned Parenthood and she managed his campaign.

It is not an accident that San Francisco Schools are debating distributing condoms to 11-year olds, and without parental knowledge.  The foundation for the same is being laid in Arizona.

2 Responses to Another Tucson Hero Earns a Seat in the State Legislature, Does He Wear Pink Scrubs?