It didn’t take long for Planned Parenthood to find their perfect candidate to augment Eric Meyer and company in the Arizona Legislature.  As you may recall from an earlier post, Daniel Hernandez was a hero five years ago when he saved Representative Gabrielle Gifford’s life after a shooting in Tucson.

In 2011, Hernandez ran successfully for Sunnyside School Board in south Tucson.  No time was wasted inviting Planned Parenthood into the district, the younger grades included.  So what now?  Time for a promotion and to put a halt to the pro-life, pro-family culture in that darn Arizona legislature.  Or how about this pending legislation which will harm children and compromise family and religious values? Who better for the job than Mr. Hernandez?

When the opposing party’s candidates challenge Daniel Hernanez’s positions,  Planned Parenthood will be ready with their well-rehearsed but tired and non-factual responses.

.@JulianCastro warns that Latin@s would suffer if GOP is successful in repealing #ACA w/o replacement. https://t.co/yheNPe3iMU

2.  Don’t mention that Mr. Hernandez is gay and the #BigGay agenda has no scientific merit or you will be called a homophobe:

The intersections of the global #LGBT & #ReproRights movements are strong & many – proud to be at #CC16 in Chicago! pic.twitter.com/qo7ZXGZck2

3. Be careful if you ask about Mr. Hernandez’s experience.  Not only is Planned Parenthood supporting him, they are paying his salary to cram more non-medically accurate information across the Southwest (clue–access to more campaign donors): 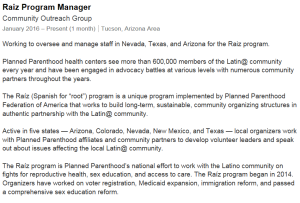 Daniel Hernandez should be easy to beat on the facts.  His opposition needs to be ready for the personal attacks and well-financed (by our tax dollars) campaign.

And the wheels on the bus go round and round………