Recently word went out that Anaheim, California schools were being inundated by the LGBT agenda, despite parent concerns.  We assume Anaheim is a place for children and families but we are finding that is not the case.

We shouldn’t be surprised since Disney is a partner with GLSEN, an organization based in New York City which pushes their radical LGBT demands in your child’s schools, whether you want them to or not.  And Anaheim is in California.  Enough said.  Here is the history along with the invitation to attend the Anaheim Elementary School District meeting on October 24, 2018 to speak during public comment.  Note this is an ELEMENTARY district and the district is hiding information from parents. 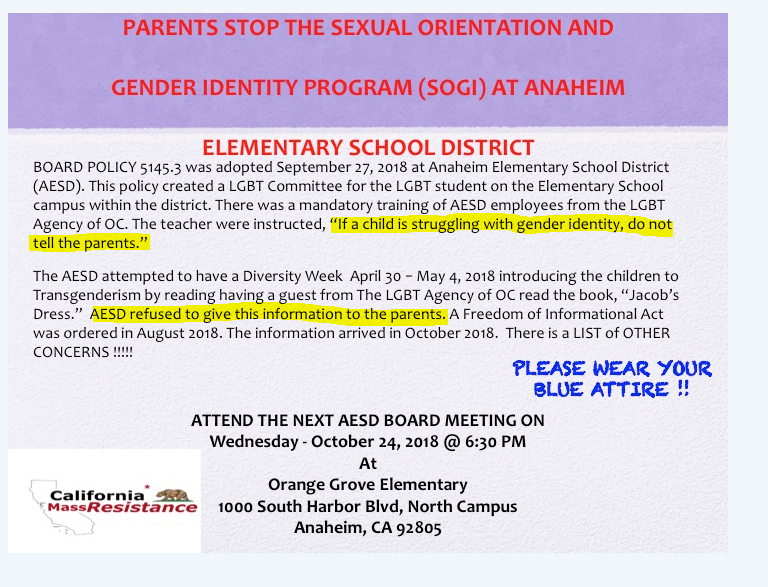 We must congratulate the parents for getting the word out.  Alerts spread throughout the country so that those with family and friends in the Anaheim/Orange County area could be made aware of this dire situation and become part of the solution.  The District is using Title IX funds to hold Diversity Week, Safe Zone signs with six colors representing the gay rainbow, and an elaborate display in the school library of Harvey Milk, a gay rights activist and politician from San Francisco.  These are our tax dollars at work.  There are also parental concerns about third parties entering the schools who the parents are not familiar with.  Anaheim Schools have a relationship with LGBT Agency of Orange County, specifically Laura Kanter.

Anaheim Schools are also receiving strong advocacy from a professor at Cal State-Fullerton who has ties with the Orange County Equality Coalition (an LGBT group).

Thanks to Anaheim parents and Mass Resistance for putting this video together that clearly sums up the situation in Anaheim:

On October 24, 2018 angry parents attended the Anaheim School Board meeting.  They were passionate and spoke from the heart.  Note at the 26:20 mark when a resident describes a recent Gay Pride Parade, the school board president asks him to watch his language.  What?

He described what he saw, which is exactly what GLSEN and the gay advocacy organizations are pushing on the schools but he couldn’t describe it at a school board meeting on record?  He didn’t use bad words but he was cautioned because there were children in the room.  Won’t those children be in the classroom during the LGBT lessons, also?

Clearly the governing board is not used to push back and tries to drive the conversation.  At 34:28, the moderator scolds the crowd about their reactions.  The board can’t concentrate.  Awww……apparently the school board meeting isn’t going as they are used to.  In other words, they want to cram this radical sexual agenda down someone else’s childrens’ throats and the parents better sit down and shut up.

All Americans can follow the lead of these parents in Anaheim.  They refuse to be bullied by the “anti-bullying” educational elites who claim to know more about child-rearing than the districts’ parents.  These parents are taking ownership.  California needs more motivated parents like these.  Those who are believers, you have science AND religion on your side.  Please get involved before it is too late.  If you are in Anaheim/Orange County, please contact betsyrossparents@yahoo.com or California Mass Resistance.  Future Board meetings will likely be more contentious.  The anti-children LGBT side will make sure to load the meeting room with representatives to hog the microphone and drown out the pro-family, scientific advocates.  Don’t be afraid.

Everyone else, check your school districts.  See if they are teaching reading, writing, math, science, and classics or are they doing gender theory experiments on your children.  Hurry.

Poetry Slam in Scottsdale, Arizona Schools is Not Poetry
EBSCO Strikes Again, but in Indiana it is Called “INSPIRE”