It is a broken record, but we must continue to report who is funding many of the Democratic campaigns in Arizona.  There are three candidates for two seats in the Arizona Legislature in Tucson’s Legislative District 9.  As usual, two are supported by Planned Parenthood and one is not.  Notinourschools supports Ana Henderson to represent Tucsonans.

One of Henderson’s opponents is Dr. Randy Friese.  We have covered his connections in previous posts.

Dr. Randy Friese received a repeat endorsement by Planned Parenthood a few months ago, another certificate to hang in his office.  Here are a few priceless quotes from his Q and A with the organization: 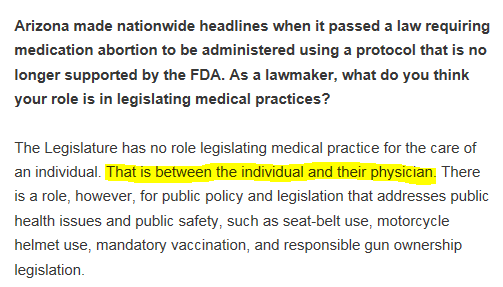 It’s too bad Dr. Friese hasn’t read the Constitution.  All LGBTQ students are protected under the law the same as anyone else.  What he means is Planned Parenthood wants to push the LGBTQ agenda to get more kids accepting all kinds of sex so when they contract a disease they will go to Planned Parenthood for help.  And if a pregnancy results from the accepted sex, Planned Parenthood will provide the abortion to fulfill their mandated quotas.  One of Dr. Friese’s donors, Cheryl Cage, sits on the board of Planned Parenthood  It’s a financial merry-go-round.

Furthermore, if safe sex is so important to Dr. Friese, why not advocate for safe teen drinking?  How about safe shooting up?  Maybe he could give some classes to the kids on how to find a vein and where to obtain clean needles since the teens will probably try drugs at some point anyway.  We have a recommendation for Randy Friese, keep your day job in the trauma department–you are valuable there but not around kids in a classroom.  (See some of Friese’s donations below.)

The third candidate in Tucson’s LD 9 is Pamela Powers-Hannley.  She is also endorsed by Planned Parenthood, but there is not the usual scripted interview published on their website.

Ms. Powers-Hannley is a clean elections candidate, which limits the donations she can receive.  However, she makes it clear on her website she is endorsed by women’s groups, and it turns out to be the same trifecta which is endorsing Mitzi Epstein in LD 18. 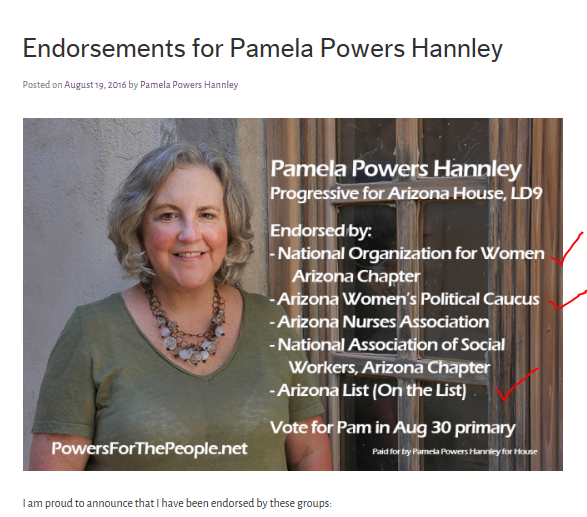 Possibly if Ms. Powers-Hannley wins next week and decides to run again in two years, she can change her strategy so she can rake in the big bucks like her LD neighbor, Dr. Friese.  Second time is the charm, look at the money coming in to his campaign…..for one purpose:

The following donation is from the CEO of Planned Parenthood of Arizona.  This won’t lighten Howard’s wallet too much because he’ll get the money back on the other side when the abortion quotas are met due to successful Comprehensive Sex Education. 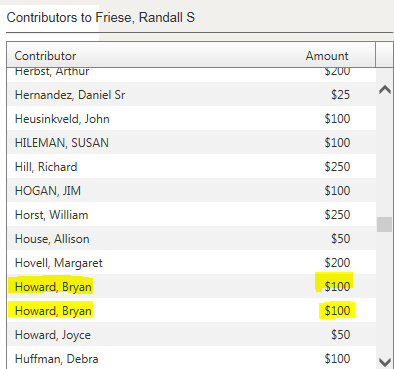 While we are at it, notice former Representative Gabrielle Giffords and her husband Mark Kelly also support Dr. Friese and his sex pals.  Keep that in mind, some think Mark Kelly will be entering politics at some point.

Obviously Planned Parenthood will get at least one of LD 9’s seats in the Arizona Legislature.  It’s crucial both Friese and Powers-Hannley don’t both get elected.  Those in LD 9, please single shot Ana Henderson so she can represent common sense in Tucson.